If there has been a consistent disappointment in my life of reading superhero comics it is the follow through on big events. Every hero has had giant big climactic things happen only for a reset button to be pushed. This happens a lot of the time before we can even explore the ramifications of said big change. It is why it has been so refreshing to see that the Marvel X-Men series have not been doing that over the past year.

My favorite comic series of last year was the complete shuffling of the X-Men universe in House of X/Power of X by writer Jonathan Hickman. I expected to get a few issues of pleasure before things began to decay back to baseline. A year later I am here to say that hasn’t happened. The template Mr. Hickman laid down has been picked up in six series which have hit issue 12 in the last month. I have continued to read the new books because there hasn’t been any attempt to backtrack on what was done. I don’t think I’ve read as many X-Men books in a row in many years. 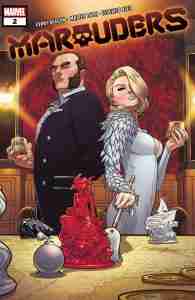 The series I am enjoying most is the Marauders written by Gerry Duggan. One of my favorite pieces of the X-Men comic universe is the Hellfire Club. With Emma Frost as one of the main characters the now renamed Hellfire Trading Company has Kate (not Kitty) Pryde leading a team of mutants into the machinations of the Hellfire world. I have enjoyed everything Mr. Duggan has done on this series.

One of the interesting offshoots of the House of X was the integration of the mutant villains into the fold. Mister Sinister has always been a favorite one I’ve loved to hate. In the six-issue limited Fallen Angels he pulled the strings in the background for Psylocke, Cable, and X-23. That segued into Hellions where he oversees the more ethically challenged mutants. Psylocke is again with him and it is this story which has drawn me in. Over the past year he has been feeding Psylocke what she needs but whether it is with good intentions is still TBD.

One of the best things about the original 70’s resurrection of X-Men by Claremont and Byrne were these huge cross-over events involving all the titles. Mr. Hickman is getting ready to take his turn as he starts the X of Swords from mid-September through November. For many years these have just been giant unfocused disasters. I am looking forward to what Mr. Hickman and the other writers on the other titles can do here. If you need any more evidence of how I feel about X-Men a year later that excitement should provide a clue.

Disclosure: I have purchased all the comics mentioned.