If there is one style of perfume I struggle with it is fruity floral. Part of that is because of the first word, “fruity”. It usually means intensely sweet which lives on the edge of my tolerance for that in a fragrance. There are many times I wish I could smell the version that didn’t make it into the bottle; where the fruit was cut in half. I had a realization a couple weeks ago when I was wearing one of my favorite hot weather colognes which has a prominent raspberry in it. As I was walking in the heat I realized this is a time when this should be at its worst for my sensibilities but it wasn’t. Which made me realize there are a few raspberry perfumes I really enjoy. Here are five of them.

The perfume that opened my thinking up is Carthusia Uomo. Carthusia is one of those perfume brands which is not very well-known but I think Uomo is one of the best colognes I own. Released in 1948 as part of the original set of Carthusia fragrances it is a raspberry, rosewood, and leather cologne. The raspberry is made very dry so that it lays itself like a veil over the soft rosewood which is supported by an even softer leather. This has been one of my favorite colognes ever since I tried it for the first time.

For the flip side the raspberry perfume I pull out when the weather turns colder is Tom Ford Private Blend Tuscan Leather. This has been what I have worn to many formal occasions. Tuscan Leather was one of the original Private Blend releases ten years ago. Perfumers Harry Fremont and Jacques Cavallier created a lovely mixture of fruit and animalic that works. The raspberry is surrounded with herbs and resins to keep it under control. As the leather rises the raspberry also meets it on its ascendancy. This is one of the best sellers in this very popular line. Wear it a few times and it is easy to understand why. 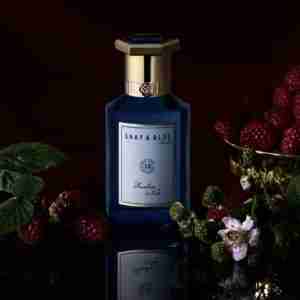 When I tried Marc Jacobs Daisy the strawberry on top made me rush for the cosmetic wipes. You could have had me on the floor laughing if you told me replacing the strawberry with raspberry would change my opinion. Marc Jacobs Daisy Eau so Fresh did exactly that and you had to pick me up off the floor. Perfumer Alberto Morillas made that change but he also lightened and tightened up the entire construction from top to bottom. It is one of the few fruity florals I point to when I’m at the mall and asked for a recommendation.

Tauer Une Rose Vermeille is an example of what I would do if asked to conspire on a fruity floral. Andy Tauer uses raspberry as a note to fill in around the gorgeous rose at the heart of this perfume it is recognizably there but most of the time it is as part of a greater rose accord that I notice it. This gets richer with a vanilla and ambergris base. This is Hr. Tauer at his best finding the right notes to fill in the spaces.

If you’re a fan of raspberry and haven’t tried these see if they give you a different perspective on the little red fruit.