For years the extraction of the essential oils from natural sources was done via extraction in hot ethanol and distillation of the resulting solution to collect the essential oil. This process due to the heat used for the extraction and the distillation causes loss of some of the ingredients which are heat sensitive or reactive with alcohol when it is heated to boiling this is called denaturing. What this means is the process does not get the whole spectrum of ingredients that come from the natural source. The only alternative to this steam extraction and distillation process was the very labor intensive enfleurage which would capture a fuller amount of the natural products but still not everything.

Then along came supercritical fluid extraction. This is a process where a solvent which exists at a gas at normal pressure and ambient temperature when placed under pressure and cooled, liquefies. If there is a source of essential oils covered by the cold liquid it extracts everything out of it. After the extraction is done the liquid is transferred into a vial where it is allowed to return to room temperature and pressure. This turns it back into a gas leaving behind the essential oil. Are your eyes glazing over yet? This is always where I see the light going out of the eyes anyone I have ever tried to explain this to. You know the whole adage about a picture being worth a thousand words? Well the video below which comes from Mane describing their Jungle Essence procedure is worth a million words as it is a beautiful way of showing how this is done.

The solvent used in the video is probably primarily butane, the gas used in cigarette lighters. When used as the solvent in supercritical fluid extraction it performs well. The first solvent used was carbon dioxide and those early essential oils were labeled CO2 to indicate that they were extracted with that. Now all of the aromachemical houses have worked to perfect different blends using other blends mostly using a high percentage of butane.

When I was at the Mane presentation at Pitti they showed the video above and they passed around examples of raw materials which were extracted the traditional steam distillation way, using carbon dioxide as a supercritical fluid, and using their Jungle Essence blend. It was striking to see how much more there was in the supercritical fluid extractions. The most striking was an extract of hot Szechuan pepper. A glass of the ground pepper pods was passed around followed by a mouillette of the Szechuan pepper Jungle Essence. If I was blindfolded I wouldn’t have been able to tell the difference. Petitgrain was also an interesting example because in that case the essential oil realized by steam distillation was only very slightly different than the Jungle Essence version. That showed me that supercritical fluid extraction is not always the best choice.

I hope that the video above especially helps you to understand the technique much better than my overly technical second paragraph and the next time you see a note which says something like sandalwood EO CO2 you’ll understand why it might smell a little different.

My thanks to Mane for the video I really do think it is very well done.

Every perfume event I go to it seems like the first day is all about checking in with those who have become friends over the years. This began on the sidewalk outside the Stazione Leopolda in Florence, Italy the site of Pitti Fragranze 2014. Francois Duquesne emerged from his cab and I asked him if there were any new Aedes de Venustas fragrances coming. He pulled out a sample vial of Copal Azur the new release coming in the fall. This is composed by the man I call The High Priest of Resins, Bertrand Duchaufour. Copal Azur is one of the most resinous fragrances I have smelled in a long time and it is tuned expertly by a perfumer who seemingly can do this at will.

They finally let us inside and I began by walking the entire room to see what is here. After my reconnaissance was done and many hugs and handshakes exchanged I stopped to introduce myself to Andy Tauer who I met in person for the first time. We discussed the Sotto La Luna line and I asked what was next and he told me the formulas for the next two are finished. We have Sotto La Luna Hyacinth and Sotto La Luna Tuberose to look forward to. Based on our conversation I am particularly excited to see how Hyacinth is realized.

Next stop was with Jeroen Oude Sogtoen who was presenting the new bottle designs for Mona di Orio Perfumes. One thing I was delighted to see was Oud has been renamed Oudh Osmanthus. Mme di Orio used osmanthus as the perfect unusual floral foil to oud at a time when too many perfumes were just throwing it in to fragrances with no thought. Oudh Osmanthus showed there was a different, and better, way to go. The new bottles feel like they were designed to nestle in your hand perfectly. Finally I had the opportunity to try the new release Myrrh Casati by perfumer Melanie Leroux. Mme Leroux captures the shadow play Mme di Orio was known for and this looks to be a worthy continuation of the legacy. One last thing for those who were missing the original fragrances Lux and Nuit Noire are now both available again in the new packaging.

As I walked into the next room the team from Masque Milano were standing in front of a giant samovar. It will be no surprise to you that the fifth fragrance from Masque Milano is called Russian Tea. The perfumer is Julien Rasquinet who made this his last work as an independent perfumer before accepting a job at IFF. While I fully expect M. Rasquinet to produce more great fragrances Russian Tea was a great one to finish this phase of his life as a perfumer. It is smoky and it has a surprising grace note of mint which works surprisingly well. I kept returning to this strip throughout the day and the development and the way it evolved rewarded me every time. I am looking forward to wearing this on my return home. 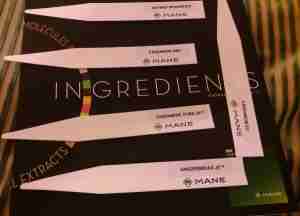 I then attended two presentations in the conference hall that were back to back. The first was from Mane all about their supercritical fluid extraction technique named Jungle Essence. This form of extraction gathers all a natural source has to give without having to be heated up. There is a video they used to show this process that I hope I can share with you in the future because it did the best job of showing how the process works. The best part was they passed around examples of raw materials captured via Jungle Essence and more traditional ways. It was striking how much more nuanced the Jungle Essences were, especially when comparing side by side. For me the most surprising was the difference between cardamom absolute and cardamom Jungle Essence. The absolute has a raw green quality which the Jungle Essence has but it is much softer.

The second presentation was by perfumer Maria Candida Gentile who presented the three fragrances in the “Il Volo del Calabrone” (The Flight of the Bumblebee) collection. Using three different versions of beeswax form three different countries she complemented each one with different notes. In Kitrea it is lemon. In Leuco it is tuberose. In Synconium it is fig. The different style of honey is apparent on first sniff, it really adds a dimension to a note which can be difficult to balance.

On my way down the hall I met the lovely Valerie “Cookie Queen” Sperrer. Now you would think I would say she gave me a cookie but she also had some new tricks to share and instead I got a Mozartkugel or as we call it in English a Mozart Ball. It was yummy after dinner tonight. Thanks Valerie.

Final stop of Day 1 was to meet the team at Grossmith and try the new Fortnum & Mason exclusive, Sylvan Song which is a fabulous floral fantasy as only Grossmith can do as they continue to create perfumes which feel like classics reinvigorated. I think I might have to arrange for someone to visit Fortnum & Mason for me as this is truly exclusive and will not be sold anywhere else.

It was off to dinner as I rode into a beautiful sunset over the Arno river.

I’ll be back tomorrow as I concentrate on the section of the exposition called Spring which has gathered a number of new brands.