I know for many who love perfume they have an equivalent passion for makeup. I am obviously not one who falls in to that particular categorization. I am not so clueless that I don’t know most of the major brands plus if they decide to expand in to fragrance I become even better acquainted with the brand. I knew about MAC cosmetics because they always seem to have a lot of space in the department store beauty aisles. I can figure out that to have that much square footage must translate to a passionate consumer. MAC had tried to branch out into perfume from 1999-2009 but for some reason I haven’t been able to determine why; they gave up on it. Especially because the 2002 releases MV1, MV2, and MV3 were very well-done department store releases. For the end of 2016 MAC is re-entering the perfume market with a collection of six new releases called Shadescents.

The inspiration behind Shadescents are the six-current best-selling MAC lipstick shades. The color of the bottle cap matches the shade of lipstick in the name. What especially got my attention was the collaboration between creative director Karyn Khoury and perfumer Jerome Epinette who were the team behind all six. The concept was to create a perfume version of lipstick. What that meant was not to smell like lipstick but instead for each perfume to be one distinct note or accord which best represented the color. I will confess that I am not one of those synesthetes who sees color when I smell perfume which means I will not comment on whether I think the perfumes succeed on that level. Where I do think they achieve their goals is to take a bold single note and treat it as a soliflore which M. Epinette can surround with some complimentary notes.

Candy Yum-Yum is a candy floss blast of ethyl maltol with vanilla cut with a set of interesting fruit notes. Crème D’Nude also is based around vanilla but in this case a set of botanical and synthetic musks wrap themselves around the sweet core. Velvet Teddy is also musky but matched with honey. Lady Danger uses cherry as the focal point. My Heroine was the one which did not seem to belong because it is a smoky resinous leather. The one I liked best is the one based on the most popular MAC lipstick shade Ruby Woo. 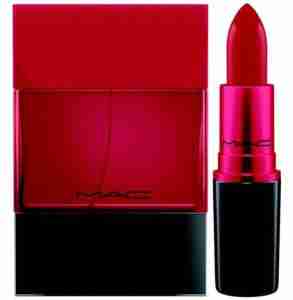 Ruby Woo actually picks up on the themes from Lady Danger and My Heroine as there is cherry and what M. Epinette calls a “red leather accord”. It opens with a kind of patent leather accord which is pierced with a strong cherry which I think is what is meant to give it its crimson shade. M. Epinette then uses as highlighting notes; saffron, iris, rose, and sandalwood. These four notes take the red leather jacket on a lively journey by the time all is said and done.

Ruby Woo has 10-12 hour longevity and above average sillage.

If one of the reasons for MAC getting out of the perfume business seven years ago, was they took too many chances. I believe Shadescents is an attempt to rectify that perceived error. All six have identifiable aesthetics similar to many of their mass-market brethren. The collection as a whole provides enough difference that I think it will resonate with the MAC consumer. I’m not a MAC consumer but I would happily wear Ruby Woo.

Disclosure: This review was based on samples provided by Macy’s.