There are many reasons I watch television. One of them is the opportunity to watch outsized characters do outsized things which make no sense. This is the epitome of mindless entertainment. When it is done right you just sit back and let it wash over you with the silliness of it all. This particular form of visual storytelling was perfected in the 1980’s with the two series, Dallas and Dynasty. The structure of both series was similar. There is a family business run by a patriarch for whom you alternately root for and against. The various members of the family and their interactions with that man as he approves or disapproves of their choices. Dallas left the air in 1991 and there really hasn’t been another one of these kind of shows since. Almost twenty-five years later the genre is back with a fantastic twist in the new Fox series Empire. 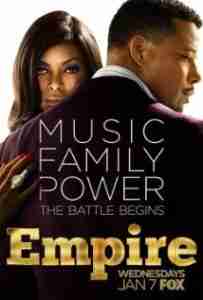 The business in Empire is the music business and the central patriarch is Lucius Lyon, played by Terrence Howard. Lucius runs Empire Records and has been diagnosed with ALS and has been given three years to live. His ex-wife Cookie played by the fabulous Taraji P. Henson has just returned from a 17-year jail sentence for drug dealing. She confronts Lucius and reminds him it was the drug money which helped fund the early days of Empire Records and she wants her half of the business. Lucius has to decide which of his three sons will take over the business when he dies. Andre, the Wharton business graduate. Jamal, the gay middle son. Or Hakeem the young musically talented socially reckless son. Everyone is plotting their own path to eventually take over Empire Records. 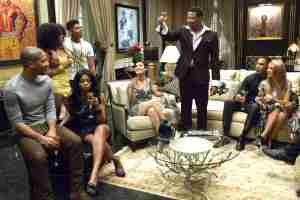 The Cast of Empire

All of this is set against the music business background and Empire is liberally using different music stars throughout. It allows for excess and conspicuous consumption to be displayed at will; another necessity for these kind of shows. Empire is produced by Lee Daniels and he has compiled an African-American cast of role players all chewing scenery with the best of them. Nobody is better at it than Mr. Howard and Ms. Henson. If there is any shortcoming to the show in these early episodes it is that the screen seems less bright when neither of them are on it. In the scenes they do together their complicated relationship is exactly what this kind of melodrama is made of. That both actors pull it off so believably is what makes Empire stand out.

I’m writing about this now because Empire has only run five episodes and it is starting to build buzz and momentum so it is easy to catch up. That way you can join me with my bowl of popcorn and cackling laugh when one character betrays the other. Empire has brought back the modern overheated retelling of King Lear with a hip-hop beat and I am loving it.