When Nicolas Chabot acquired the rights to Le Galion he also acquired the original notebooks perfumer Paul Vacher wrote down his recipes in. For most of the collection perfumer Thomas Fontaine was required to lend a hand to update these formulae. Whip and Eau Noble were two of the three that were able to be reconstructed without change from what was written in M. Vacher’s notebook. Both of them share some similarities in that they are floral citrus cologne compositions. That they were separated by almost twenty years shows an interesting difference in what M. Vacher thought a cologne should smell like in 1953 and 1972. 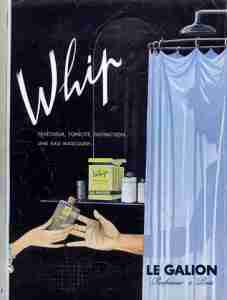 Whip was the one from 1953 and of all of the perfumes in this very excellent collection is my favorite. M. Vacher creates a cologne full of bullwhip-like pops of percussive notes. He takes traditional cologne architecture and snaps in spices in between. Then a very green jasmine heart leads to a greener base over the supple coils of the whip.

The best colognes all have a bit of an olfactory snap to them from the first moments. Whip ups that to something that lives up to its name. M. Vacher marries lemon, bergamot and lavender but then lashes them with high concentrations of tarragon and cardamom. I really like this beginning it gets my attention and it is fascinating. The heart is jasmine and violet again lashed with a healthy amount of galbanum. This forms a floral encased in green which is dominant and very spiky. The green theme continues into the base as oak moss, vetiver, and a little patchouli usher Whip towards its end. In the very end the titular leather of the fragrant whip forms the final accord.

Whip has 8-10 hour longevity and above average sillage. 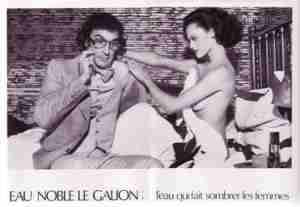 Eau Noble would be the last perfume by M. Vacher before his death in 1975. As in Whip he is again exploring a citrus floral leather trio in a cologne structure. Where Whip is all about power Eau Noble is much gentler, a more subtle perfume experience. It also reflects the prevailing trend towards citrus focused fragrances that Edmond Roudnitska has ushered into style in 1966 with Eau Sauvage.

Eau Noble, like Whip, uses lemon and bergamot on top but this time there is only a bit of galbanum to turn the citrus aspect more towards the rind than the pulp. It modulates the citrus into something softer. Lavender and sage form the heart of Eau Noble and here it takes on almost classic cologne formula with sage substituting for the rosemary. We finish with a leather accord of patchouli, oak moss, and musk. This is a soft supple leather befitting the softer nature of Eau Noble. Cedar provides a bit of woody framing at the end as well.

Eau Noble has 6-8 hours of longevity and average sillage.

Disclosure: These reviews were based on samples provided by Le Galion.