On day 2 of Pitti Fragranze the public is invited to attend. This gives a different energy to the fair from Day 1 which is industry only. It is enjoyable to watch young perfumistas discovering brands and meeting the perfumers behind them. Their attendance today will light a fire in their heart which will burn for many years to come. I still had some work to do catching up with some of my favorite brands and exploring some new brands.

I didn’t recognize Pierre Guillaume with his new short haircut and as a result I kept looking past the tall man standing next to his display. Maybe because it was first thing in the morning but I finally realized that tall man was M. Guillaume. Another perfumer who I had never met in person before. He showed me his latest release for his Huitieme Art Parfums line Liqueur Charnelle. This is a rich cognac perfume that made me feel as if I needed to be wearing a velvet jacket next to a fireplace. I also got a preview of the next new release Mojito Chypre. You might think the name tells you all you need to know but M. Guillaume includes a wonderfully surreal strawberry note in between the lime and the chypre. This felt like perfume made with a wink and a smile.

Perfumer Cecile Zarokian has been having a tremendously successful year and I was able to try her two latest releases; Laboratorio Olfattivo Patchouliful and Jacques Zolty Van’lle. The press art for Patchouliful captures a king sitting on a throne in shorts and flip flops. It is an apt description for a fragrance which uses patchouli in a lighter opaque application. It is another example of Mme Zarokian’s ability to find new ways to interpret notes we all think we know. Jacques Zolty is meant to be an entry brand into niche with a bit of niche sensibility. Easy to wear but with some unique aspects added to it. Van’lle is just that a rich light amiable vanilla. It doesn’t cloy it swaddles you in sweet comfort.

I also connected with Olivier Durbano and tried his tenth release, Promethee. M. Durbano delved into the Greek myth of Prometheus. My first impression is this might be the best fragrance M. Durbano has released. Promethee captures the fragrant touchstones of the myth and it is housed in a temple of resinous components. This is confident perfume made by a perfumer who has developed over the last ten years into one of the best independent perfumers we have working.

John Molloy of Memo walked by and asked me when I was going to drop by and get a sneak preview of the next release from them. Before I sprayed it on he told me to imagine a woman dressed in a leather skirt who carried that ineffable air of a Parisienne wearing rose perfume. The upcoming French Leather is that rose and leather combination with the style of Paris imposed on it. It will be released early in the fall. 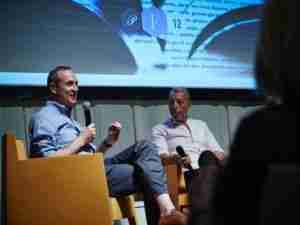 Time for the presentation by Chandler Burr interviewing Robert Gerstner and Miguel Briceno of Aedes de Venustas in New York City. For the first part of the interview the talk centered on how the selections in the store are curated and what it takes to have the full package necessary to be included in the store. They figure they get approached by one new brand a day and over the course of a year they might only find one or two which they would like to add to the inventory. It was a fascinating candid look behind the scenes in a premiere niche perfumery and how decisions are made.

Now I went to spend the rest of the afternoon exploring the section called Spring for new fragrances by small independent brands. I saw most of them and there were two which stood out to me. 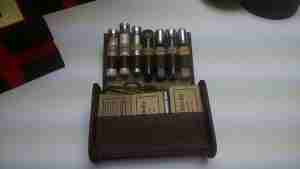 Peccato Originale is an inventive brand which bases their packaging, perfume names, and inspirations on old pharmacy artifacts. What you see above is a first aid kit from sometime in the 1920’s. Two new fragrances were introduced at Pitti, Tintura Spiritosa and Antidoto. Silvia Monti has taken her previous life as a pharmacist and used it to make perfumes which feel like blend of old style chemist and new style perfumer. Antidoto is my favorite of the two new releases as it has a very long-lived top note combination of intense citrus. It takes hours before mate tea followed by rum push it out of the way. This kind of juxtaposition was really interesting to wear and I enjoyed the languid development which is still continuing twelve hours after I applied it. 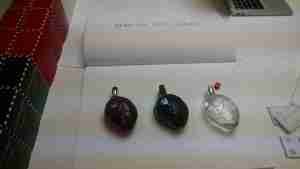 The best new brand I have seen through the first two days of the show is Map of the Heart. Pierre Dinand designed heart shaped bottles which look like they came out of the television show Once Upon a Time. These fragrances are no fairy tale as the three fragrances Clear Heart, Black Heart, and Red Heart form a diverse collection from Clear Heart’s easy wearing affability through to Red Heart wearing its tuberose on its sleeve. The one real stand out of not only the line but the entire show is Black Heart. This is a descent into all of the dark places most perfumes fear to tread. It is not for those who like their fragrances lighter. Black Heart is simply fascinating to wear.

One day left and eight hours to try and cover everything I haven’t so far. See you tomorrow.