As part of my duties as Finalist Judge for the 2016 Art & Olfaction Awards I came across one of the most interesting perfumes I have tried for many years. Since judging it I have spent many hours trying to come to terms with my feelings about it. At its most pure level I think it is an exceptional piece of perfume construction. At a personal “does it smell good?” level I am less enthused. I think I have finally arrived at some sort of coherent opinion on this perfume called Xyrena Dark Ride.

The brand Xyrena was founded by Killian Wells in 2014. Mr. Wells is the perfumer behind all of the releases to date. The first release was for one of the contestants from RuPaul’s Drag Race called Flazeda by Pearl. Mr. Wells would also champion LGBT issues with a subsequent release Formula 3 by Dalton Maldonado. Mr. Maldonado was an openly gay athlete. In December of 2015 the Virtual Reality series of three fragrances was released. These were meant to be photorealistic recreations of specific real life smells. 66 was the new car smell crossed with the oil and gasoline used in the engine. Factory Fresh was the smell of new shoes as you open the box. Both of these are sort of pleasant smells. Mr. Wells has a talent for putting that real life into the bottle. Which brings us to Dark Ride. 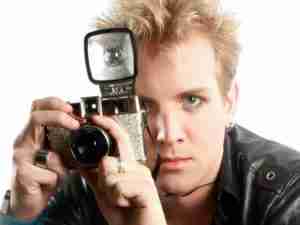 Dark Ride is meant to be the smell of a water park. As he did in 66 and Factory Fresh he completely nailed the smell of a water park. The heavily chlorinated water, the smell of the people who are using the park including a bit of urine smell, and the sun beating down on it all vaporizing these odors. This was not pleasant, in any way. I was repulsed by the strong nature of what Mr. Wells had done with Dark Ride. I have sniffed a box of new shoes. The smell of a leather car interior tinged with petroleum products also has its pleasures. Acrid chlorine, urine, and ozone; not so much. Except I kept thinking it was incredibly brilliantly real. I kept picking at this olfactory scab unable to turn away because it hurt so good when I abraded my sense of smell with it. All of these Virtual Reality releases are linear with the specific accord in place from moment one until it disappears. Mr. Wells wanted the wearer to live with these for the entire time you have it on your skin.

It took me a couple of well-spaced out weekend days to get my customary two days of wearing a reviewed fragrance in. It was a bit of an endurance test. It was also illuminating as I was dealing with the concept of whether pleasant was a critical component of artistic perfume. In the end I realized that the trope of having to smell good to be a perfume is just that. An axiom that is rarely tested. Mr. Wells wanted to see if others would see what he saw.

I believe Dark Ride is an intelligently rendered fragrance which does exactly what Mr. Wells desired to do. He has provided a perfume which carries with it an aura of repulsion. He has also made an artistic statement that beauty is truly in the nose of the beholder. This particular nose has decided Dark Ride is as good as it gets.

I would encourage any perfume lover interested in understanding the limitations of what you find beautiful and artistic to get samples of all three of these Virtual Reality fragrances from Xyrena. I promise you it won’t be a typical day of sniffing.

Disclosure: This review based on a sample I received while judging for the 2016 Art & Olfaction Awards.