Whenever I talk about where my perfume story begins I always say it started with a bottle of Jovan Musk for my thirteenth birthday. The ads told me it made the girls go wild. While I can surely attest the girls in middle school did not fall at my feet they did notice I “smelled good”. Which, to be honest, was good enough. Along the way I would always be looking for more and more musk in my fragrance and when I found Serge Lutens Muscs Koublai Khan that search ended. There was one stop along the path from Jovan Musk to Muscs Koublai Khan; it is perhaps the perfect compromise between those two perfumes; Kiehl’s Musk. 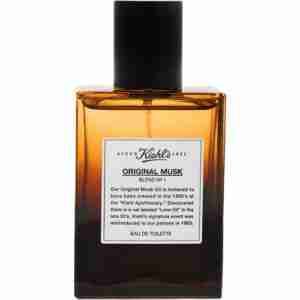 I’m not sure what it is about musk which prompts a brand to promise it to be love potion no. 9 but Kiehl’s was not immune to it. The story reads like this on the label of my bottle: “Believed to be created in the 1920s at the Kiehl's apothecary, this scent was later discovered there in the 1950s in a vat labeled "Love Oil."  It would be released in 1963 and has been available at Kiehl’s stores worldwide for over fifty years. It really is a Goldilocks “just right” blend of musk which makes it one of the most versatile fragrances to feature it. One of the reasons is while it retains some of the dirtier facets of musk it is dressed in a grouping of cleaner ingredients to add some respectability.

The perfumer behind “Love Oil” has been lost to time but whomever put this together realized a suite of florals which could stand up to the musk was the right choice to mellow its more carnal qualities. To start orange blossom is what I first smell, the musk arrives with rose and neroli on each arm. The musk wants to get a bit randy, but the florals surround it and cover it in a floral blanket of kisses. Eventually the musk finds the upper hand. Early on this is that musk of sun-warmed skin which in a slow evolution it does find its way to its sexy character where a little bit of tonka helps keep it from going completely feral.

I don’t wear Jovan Musk very often, but Kiehl’s Musk gets a few wears every year. It is because it gives me enough of what I love in musk without being at full volume. It is just at the limit of my $50 per bottle limit for Discount Diamonds but it is a classic nonetheless. I can’t vouch for it being “Love Oil” but it is a damn fine musk perfume.