I have spent many days on the beach lost in adventure among the stars. In the summer one of the genres I enjoy reading is one called “space opera”. It is an easy phrase to decode because it derives from “soap opera”. It contains some of the melodramatic elements of soaps but mostly it is a fast-moving story of heroes and villains in spaceships. In the early days that was all there was to the genre. The novels of E.E. Doc Smith, both the Skylark and Lensmen series, were just that. As the modern generation of science fiction authors wanted to pay homage to the space opera they also had more to say about society within the stories; Frank Herbert’s Dune series and Vernor Vinge’s A Fire Upon the Deep are good examples. Science fiction is now undergoing another sea change as authors who began their career writing online have expanded into the traditional print world. One of those authors Kameron Hurley has been one I’ve particularly enjoyed because she brings a great energy to her writing. Her two previous series Bel Dame Apocrypha and Worldbreaker Saga are examples. For this year she has released a stand-alone space opera, The Stars are Legion. 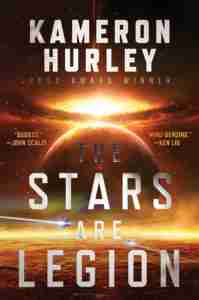 The best writers in science fiction love worldbuilding. I suspect through the process it also reveals a story to them. The worlds built by Ms. Hurley in her novel are in motion. They are world ships, taken together called The Legion, who have been traveling a very long time. so long that the survival of the ships and how they are kept together is the world in which we find our twin heroines Zan and Jayd. 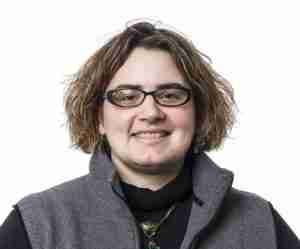 Zan wakes up from a coma with most of her memory missing. Jayd arrives to help fill in the gaps. She is told her loss of memory was caused by her mission to board the ship Mokshi. She is given the impression she has gone on this mission multiple times and has been the only survivor each time. The carrot they use to get her to go back; her memories are there on Mokshi. As she prepares for another run she realizes Jayd was a part of her life giving her another reason to want to succeed.

Again, she fails in boarding Mokshi and when she returns is cast into the center of the ship she is on along with all the other trash. Jayd is married off to one of the ruling warlords. The rest of the book is Zan crawling her way up through each successive level full of threats, including a real bug-eyed monster, at one point. Jayd engages in a Game of Thrones political adventure as she learns where the power in The Legion is centered and how to manipulate it. A different type of crawling through levels with different dangers but no less fascinating. By the end both women will discover the truth of what needs to happen. The suspense is whether they can be reunited to accomplish it.

Ms. Hurley has laid out a world where the decisions of Zan and Jayd propel the story to a climax of satisfying proportions. Which is exactly what I want while sitting in my beach chair.