There is an interesting side effect to smelling as much perfume as I do. I sometimes smell things which aren’t there. There have been what I call ghost accords living with me for the past few years. I used to think I had a problem until a perfumer friend told me he has the same thing. He has said these have sometimes inspired his actual perfume creation. It is easy for me to put them aside because I don’t have the ability to make them real. But for a perfumer that’s a different thing, they can turn the ghost into something solid. Independent perfumer Euan McCall has done this in Jorum Studio Fantosmia. 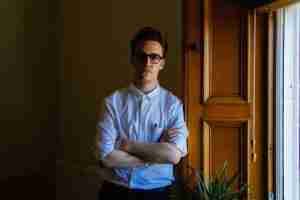 Mr. McCall talks about the inspiration for this perfume in the same ways I described my experience. He described it as, “the scent had silhouette but little form, what structure there was seemed distorted and contorted, however malleable, fluid, textural”. It is like chasing a scented will o’ the wisp never in reach but maddeningly present. Mr. McCall wanted to capture his ghost to give it substance in Fantosmia.

It opens on a transparent spice accord of cardamom, fennel, nutmeg, and saffron. This is the opacity of the phantom appearing. Mr. McCall uses a trio of sharp green ingredients as cascarilla, shiso, and mate tea begin to add weight to this phantasm. It starts to struggle from the effort to contain it. Before it can get away a base accord of animalic substance grabs a hold and does not let go. This is where the ghost is made real as Mr. McCall uses tobacco and castoreum in a compelling duet of the narcotic and the animalic. Swirling through it is spirals of white oud smoking on a brazier. They reaffirm the transparency of the ghost we started with.

I began 2020 being introduced to Mr. McCall’s own line of perfume. It seems fitting I should finish the year chasing ghosts with him.