Funny books, comic books or just the comics; these are all ways most commonly used to describe a story told in graphic form. They are terms which describe smiles and lightheartedness not seriousness. For the fifty years I’ve been reading comic books they still mostly get a funny look. As I page on my iPad on the bus I can see my seatmates looking over my shoulder probably wondering when I am going to grow up. For me they are what I use to entertain myself. They have put a smile on my face almost daily since I was a child. But there are some out there who think the medium can be used for more serious storytelling.

The first to do this was the artist Art Spiegelman when he released “Maus” in 1986. It told the story of Mr. Spiegelman’s father’s time in Nazi Germany and his imprisonment in a concentration camp. The story was told with a power only a graphic medium could bring to the story. It helped bring the term “graphic novel” into the lexicon. It won a Pulitzer Prize and has been considered a piece of literature since its publication. 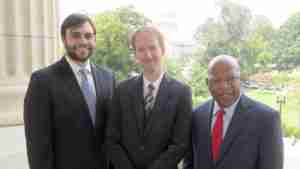 These are not going to be themes which are easily turned into monthly fodder for the people who read comics. I could even say it took almost thirty years for the next “Maus” to appear. That graphic novel has arrived with the publication of March Book 3 completing the trilogy begun three years ago.

“March” is the story of the civil rights movement as told by one of the most integral members of it, Congressman John Lewis. He was there standing next to Martin Luther King, Jr and he participated as a key part of the effort.

Congressman Lewis would talk about his times in the civil rights movement with his telecommunication aide on his re-election effort in 2008; Andrew Aydin. After hearing these stories Mr. Aydin began to write his master’s thesis on them. When he next ran into Congressman Lewis he brought up the idea of him writing his life story. He fired back only if Mr. Aydin would help. Somewhere along the process they decided to turn this into a graphic novel and asked illustrator Nate Powell to be part of the project. 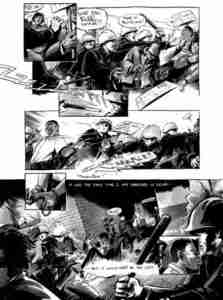 Starting in August of 2013 there have been roughly one volume a year released of the graphic novel titled “March”. The story itself is enlightening just for the firsthand account of the civil rights movement throughout the 1960’s. There is so much to learn but much of it is done with a tone that lays out the facts of Congressman Lewis’ journey leaving the reader to draw their own conclusions. The story is also more powerful for the way the graphics can make things more visceral. In the panel above the letters describing the movement of the police baton grab me much more than if just written out in a sentence. It is what can make telling a story this way better; when the material calls for it.

March has been a fantastic success and has found its way into high school and college curricula. Much like “Maus” before it “March” is a testimonial from one who was there for a time of man’s inhumanity to man. It is important to have them in the public record so we never forget. “March” is an unforgettable chronicling of one of these times.