I have received a few really good modern fougeres this year. While I was wearing them there was something about all of them which was reminding me of something. As it so often does it came to me while in the shower one morning. The classic 1970’s era fougere I was thinking of was Paco Rabanne Pour Homme. There have also been some recent releases which have hearkened back to that timeframe, as well. All of those chose to emulate the powerhouse nature of masculine fragrance at the time. As is true of almost any trend there will be a few who try to blaze a different path. Most of those end up as entries in my other series, Dead Letter Office, because of it. It makes Paco Rabanne Pour Homme all the more remarkable for having lasted for forty-plus years because it was different than the other fougeres of the time.

Paco Rabanne was a fashion designer who began his career in 1966. Many knew of him as the costume designer on the 1968 movie “Barbarella”. His fashion was similar to those sci-fi designs as he used lots of metal and plastic. He was one of the earliest flamboyant designers. Even now the very popular French singer-songwriter Mylene Farmer wears vintage Paco Rabanne clothes when she performs. As he began to move into fragrance his first release was sleek aldehydic floral named Calandre. You could almost imagine this is what Jane Fonda wore as she played Barbarella. It would be four years until Paco Rabanne Pour Homme joined Calandre. 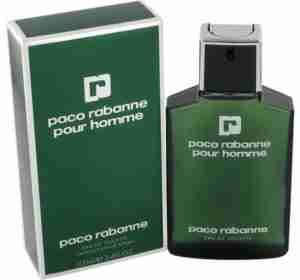 Sr. Rabanne worked with perfumer Jean Martel on Paco Rabanne Pour Homme. Their take was to add a lot of herbal notes to accentuate that character of the lavender. it also tints it much greener than the other fougeres that shared space on the fragrance counter with it. It was so green it came off as soapy until the final part of it goes deeper and more typical of those other fougeres.

Lavender sets itself up as the early focal point upon which herbal notes are layered upon. Tarragon, thyme, rosemary, and clary sage come first. They make lavender seem very cleanly green through all of that herbal overload. The heart uses geranium to continue the green theme but now a different suite of spices warm things up for the base accord to come. Cinnamon, cumin, and clove form a slightly leathery accord although the clove is most present. It now moves to a biting oakmoss softened with myrrh and tobacco.

Paco Rabanne Pour Homme has gone through multiple reformulations. The bottle I own is from the mid 1990’s. I went down to my local discounter and tried the current formulation and found it to be a degree or two lighter overall but still recognizably the perfume I have in my bottle at home. The lightening up might even make it a little more office friendly. If you enjoy some of the modern fougeres of the last few years go back and see when Fougere 2.0 began with Paco Rabanne Pour Homme.