I was very fortunate when I started my first job, in Connecticut, to have one of my best friends from college, Joe, living in Manhattan. I was able to spend numerous evenings and weekends in New York City experiencing much of what the big city had to offer. One of the things both of us enjoyed was great food. Our birthdays are eight days apart in October and we would celebrate on the weekend in between by working our way through the four-star restaurants in the City. Whenever we talk about the best meals we ever had we always agree that our 1989 birthday dinner at the Lafayette Hotel was probably the best of them all. 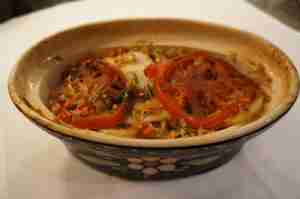 Alsatian Baeckoffe as served at Jojo in 2012

Earlier that year, Joe told me when I arrived on a mid-week night we were going to try some Alsatian food at this restaurant around the corner on Third Avenue called Brandywine. Brandywine was an aging NY Steakhouse and was undergoing a menu overhaul to start serving Alsatian food. I ordered the classic Charcroute which is a traditional dish of sauerkraut and various meats. What I had served to me was something so above what one would expect from sauerkraut. It was crunchy and tart and the meat was lamb, pork, and veal. It was luscious. Towards the end of the meal a man in chef’s whites walked over to us to ask what we thought. In my usual effusive way I gushed at how fresh the sauerkraut was and how do you make it not mushy. I received a smile and an explanation along with an introduction to Chef Jean-Georges Vongerichten who was consulting on the menu revamp for Brandywine. A few months later we would be sitting at a table in his four-star restaurant in the Lafayette Hotel and he dazzled us with the tasting menu. This meal was full of the things he has come to be known for. Fragrant broths, poaching in juice, and herbal concoctions. It transformed traditional French cuisine into a comprehensive sensual experience. 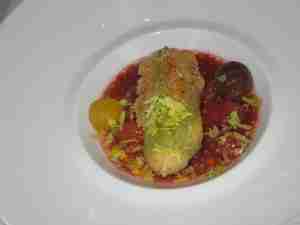 The use of lighter alternatives to traditional sauces add a visual component of vibrant color. Then, fragrance fans, it is the aroma of these dishes that was really enhanced by the use of these preparations. There was a cloud of culinary sillage wafting off every dish which was put in front of us. Sweet juice cut with herbal contrasts all blended as skillfully as our most accomplished perfumers. There is no chef who uses ingredients that perfume the air above his dishes as adeptly. 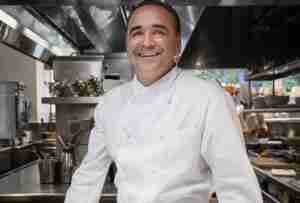 Since that meal in 1989 Chef Vongerichten has become one of the Emperor Chefs who has exported his way of cooking to a number of restaurants world-wide under his imprimatur. The flagship restaurant in New York City is the eponymous Jean-Georges which is one of seven restaurants in NYC to receive three Michelin stars. Even though it has been twenty five years since the meal at the Lafayette Hotel the cuisine at Jean-Georges remains as exciting and evolutionary as it was then.

If you want a meal which is satisfying to both palate and nose look for a restaurant that Jean-Georges has opened up, near you or in a city you are visiting, and treat yourself to a singular aromatic culinary experience.