Three years ago, if I had asked anyone to name the members of the Guardians of the Galaxy I am pretty certain the most common response would have been, “Who?” Now I think I would get the correct answer from a large majority. It is credit to director/writer James Gunn and the actors who made the roles that this is so. Now comes the opportunity to see if they can do it a second time with Guardians of the Galaxy Vol. 2. 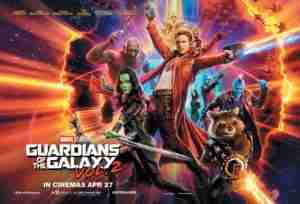 This second version picks up after our band of misfit heroes have been living together a while. One of the main themes of this movie is the concept that the family you choose is as important as the family you are born into. The Guardians are family by choice; every decision they make throughout the movie is meant to protect that. The forces trying to wedge themselves in between are the family by blood of some of the characters. As each of these characters are faced with an option it plays on the idea of friendship over genetics. Mr. Gunn pens a funny fast-moving story but throughout is the same heart of a group of outcasts having found a home. It is that heart which makes both movies stand out among the other movies concerned with those who save the galaxy, world, city, or neighborhood.

There are two incredible performances which illustrate this quality. The first is the one you’ve seen in many of the commercials, Baby Groot; voiced by Vin Diesel. After Groot sacrificed himself to save everyone in the first movie he is growing back from a twig. In Vol. 2 he is a precocious toddler doing the things which end up on Facebook feeds i.e. being generally cute. It is the subtler moments as the rest of the crew protects him from danger and he reaches out for all of them, not just Rocket, for comfort. Groot saved them last time and this time he is their responsibility.

The other performance is Michael Rooker as Yondu the Ravager who captured Peter/Star-Lord on Earth and instead of delivering him to his father kept him as part of his crew. That choice was part of something broader which is not fully explained until midway through the story. When that happens Yondu becomes something else than what we have seen previously. Mr. Rooker portrays the character quite beautifully becoming the largest confirmation that family by choice is best.

Mr. Gunn has written and directed a sequel which takes us deeper into every one of the Guardians past; providing new perspectives on each character. The fusion of seventies pop music with 2017 action moves is better this time. The title sequence done to the music of Mr. Blue Sky by ELO sets the mood and re-introduces us to the gang all in the time it takes to list the stars’ names.

I thought Vol.2 was better than the original movie because this time the Guardians were at risk of losing this family they chose. The personal stakes were higher even if the galaxy was once again being threatened. Mr. Gunn has made a movie about how he feels about that well worth spending a couple hours with. Just remember to sit through the credits as there are five extra scenes sprinkled throughout.

There are people who will tell you the best part of a movie are the previews. There is a big reason for that. They don’t operate under the same rules. They can put all the best jokes in it. They can scramble the narrative to the point that it becomes deceptive advertising. Yet there are sometimes where a preview, or a trailer as they are called, can just make me want to see a movie right now. That the most disappointing thing about it is the future date before I will be able to see the actual full movie. This past week the teaser trailer for the May 5, 2017 release of Guardians of the Galaxy Vol. 2 achieved that. 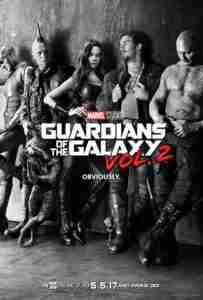 In 2014 the original Guardians of the Galaxy was a surprise hit. It grossed over $750 million dollars which was incredible for a movie based on comic book characters that few had heard of. Director James Gunn had not only heard of them but he clearly had an affection for them. He assembled a cast who inhabited these roles making them their own. The people at Marvel Studios knew they had a hit on their hands before they even released it. Which allowed them at add to the end of the movie “The Guardians of the Galaxy will return”. Next May that will come true with Guardians of the Galaxy Vol. 2.

For big anticipated movies like this the advertising campaign starts about six months out. The first phase is the release of a teaser trailer. A short set of images meant to whet your appetite. The teaser is usually followed up rather quickly by a full trailer which runs for 2-3 minutes revealing plot details meant to draw you further in. The final long trailer usually arrives 60 days or so prior to the release. The bigger the anticipation the more these clips will be examined and broken down. A Star Wars trailer will be combed over with forensic detail looking for clues. Guardians of the Galaxy Vol. 2 just released the teaser trailer and it is one of the best examples of how to re-engage your audience in one minute and thirty seconds.

For a sequel of a big movie the director doesn’t need to introduce the viewer to what they are seeing. The job of a teaser is to remind you why you loved the original while promising more of the same. Mr. Gunn pulls this off by first using one of the 1970’s songs which made up the soundtrack of the first movie; Hooked on a Feeling by Blue Suede. That immediately reminds you of the fun of the music. Then over the first half of the trailer we see shots of all our returning heroes. Which leads to a scene between Star-Lord, played by Chris Pratt, and Drax, played by Dave Bautista. It captures all the fun of the way these characters interact in 30 seconds. The final shot shows us the only Guardian we hadn’t seen previously in a way much different than last we saw that character at the end of the first movie.

Kudos to Mr. Gunn for this kind of detail it raises my hopes for the sequel and it makes me look forward to the longer trailer which should be here in a few weeks.