As much as I would like to portray myself as “The All-Knowing Colognoisseur” there is no way to live up to that. Most of the time I try not to think about the perfume I am not smelling. I accept it is out there hopefully to be written about by some other perfume lover. The only time I feel a smidge of regret is when an independent perfumer whom I like is producing good perfume which I am unaware of because I am not paying attention. At the end of last year I checked the website of House of Matriarch, the brand by perfumer Christi Meshell. I started writing about her perfumes in 2010. She is one of those perfumers who really took off in 2012 with the twin releases of Black No. 6 and Coco Blanc. She would continue to make compellingly beautiful perfumes. 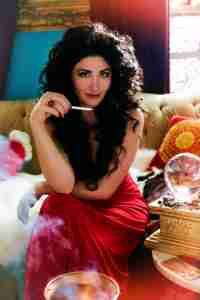 For some silly reason unknown to me I stopped paying attention around three years ago. It was after she released a gorgeous rose perfume called Kazimi. I wore that to a Holiday event, receiving multiple compliments. Mrs. C pays attention when others say I smell nice. On the way home she asked me about the perfume. I went on in my typical way about it. She then asked me what Ms. Meshell had done recently. It was right at that moment I realized I had no idea. I also felt dumb for not knowing. I remedied that when we got home. When I got to the website, I was greeted with the notice for the release of a new limited edition, House of Matriarch Black Sheep. An order was placed followed by the arrival of a sample a few days later.

One of the things which caught my attention right away in the website description was Black Sheep was a “natural costus” perfume. Costus is one of those textural ingredients in perfumery which can make a perfume. Ms. Meshell’s intent was to accentuate the wooly scent profile it has. To that end it says on the website she made a tincture of actual wool from a black sheep. Once this all comes together it is a perfume which feels like your favorite wool sweater.

Black Sheep opens with the costus present right away. In the early going a suite of spices tease out the faint peppery quality of good costus. A soft green also comes from clover. That wooliness is now enhanced with the cereal grain, barley. It intersects with the green of the clover while simultaneously causing the costus to get fuzzier. There is also a kind of lanolin-like soapiness which I presume is the wool tincture’s effect. Labdanum and copal provide the rest of the accord acting like knitting needles for a cable stitch sweater.

Black Sheep is just like my favorite Irish wool sweater. I snuggle within its soft fuzzy folds while breathing in deeply.