Every large perfume fair I attend when I see someone this conversation takes place, “What have you smelled that was good?” Over the course of the exposition one name will begin to be repeated as the answer to this question. Thus begins the building of that desired positive buzz. It was at the end of the first day that a couple of my blogging colleagues mentioned the new brand Homoelegans. I moved it up my list to try. By the time I got to their stand a day later I had heard that name numerous times. 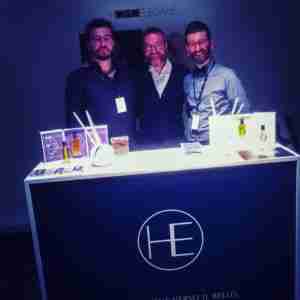 When I arrived I was greeted by the owners/creative directors Maurizio Piazzi and Francesco Gini. Before I ever sniff a strip there are times I have a good feeling for what is to come. Standing in front of Sigs. Piazzi and Gini was one of those. Together working with perfumer Michele Marin they have two debut releases; Tadzio and Quality of Flesh. The entire creative team has produced some singular perfumes with depth and power. 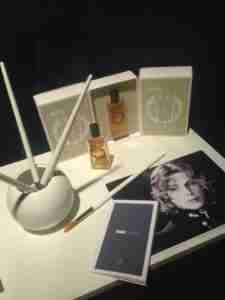 When they were handing me my strip of Tadzio I was being told about the beach and the ocean. As I sniffed I was thinking, “Aquatic? Really?” Then they shifted to our protagonist a young man smelling of the ocean, eating a piece of fruit. Now I connected as the smell of sun warmed flesh covered in salt with the juice of an orange dripping off of his chin. That I got. Tadzio is that bohemian spirit of youth hanging out bare-chested in shorts during the day at the beach.

Sig. Marin uses orange as the fruity note up top. Combined with it is the vegetal green of ivy and the watery version of cucumber. It forms that aqueous part of the accord of salt sprayed skin. The skin comes courtesy of a mix of musks, immortelle, opoponax, and patchouli. Sig. Marin forms that accord brilliantly. Tadzio settles down into that indolent smell of daytime skin for many hours. Tadzio has 12-14 hour longevity and moderate sillage. 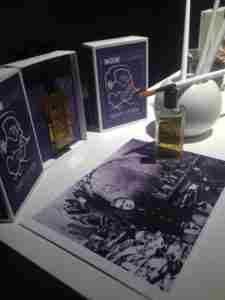 The other release Quality of Flesh is not about innocence. It is about the skin of lovers crushed together in dark corners. Inspired by the Francis Bacon quote, “I like men. I like their brain. I like the quality of their flesh.” The perfume named after this is all about the smell of passion.

Quality of Flesh opens with a bit of juniper berry to give a gin cocktail vibe. Very soon black pepper intrudes with that sizzle it can provide. This leads to that dark corner where we find narcissus and costus waiting. Sig. Marin’s use of costus is inspired. Costus has that kind of sweaty body decaying smell. The narcissus with it forms a chord of anticipation. Leather, civet, castoreum, and benzoin take this even deeper. I think this is going to be too intense for some as the animalics pile upon each other to go with the narcissus and costus. I was completely consumed by my passion for this. Quality of Flesh has 14-16 hour longevity and has minimal sillage. This is most definitely a perfume to be worn for nights in search of that which Mr. Bacon spoke of.

There is so much right in what Sigs. Piazzi and Gini have done with Homoelegans. Two well composed releases and only two. Not trying to go with prevailing trends; staying true to their own artistic vision. Counting that others will gravitate to it. Genuine passion in their demeanor and in their perfumes. All of this is what adds up to being buzzed about.

Disclosure: This review was based on samples provided by Homoelegans at Esxence 2016.