Once we are finally through the pandemic there are going to be a lot of things which will have changed. In the past month I’ve realized one big one for me. I don’t think I’m ever going back to a movie theater. That is because the experience has come to my own living room. Which I have surprisingly found out works great for me.

Prior to all the quarantine lockdown Mrs. C and I went to the movies a couple times a month. We had the rewards cards for both theater chains we patronized. We were the highest level in both. I enjoyed seeing action movies on IMAX and smaller independent films with an audience I could share the emotional journey with. If you asked me in January 2020 if I would consider not returning to a movie theater, I would have thought it unthinkable. Eighteen months later it has become preferable. 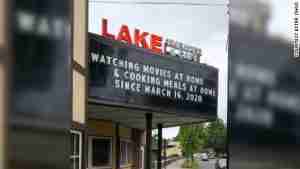 The last few weeks have sealed the deal for me. I watched “Black Widow” a Marvel movie I would’ve gone to see on IMAX. On my big flat-screen it was fine. Were there a couple scenes I thought might have been cool on the giant IMAX screen? Sure, but it wasn’t that much different. The upsides were we could watch it whenever we wanted. No waiting for a showtime. We could hit pause for a bathroom break. No sliding back into my seat and asking Mrs. C what I missed. As for popcorn and drinks, I have that down to a science already. I like my home-made versions way better. This is going to be the problem for movie theaters. All they have left to sell to a consumer is the experience on a big screen. I suspect there are others who share similar feelings to me.

I’ve really come to realize this as in the last two months I’ve watched F9, Cruella, Black Widow, Jungle Cruise, and The Suicide Squad. The summer movie season has arrived in my living room. We would have gone to a theater to see all of these, but we didn’t have to.

I worry that this is going to lead to significant downsizing of movie theaters. My love of movies was born in a dark room with a projector flickering in the back. Does the love for the art form come through for those whom the home experience is their introduction? I hope so. Otherwise there is going to be some other downsizing going on.

It may come to the point where I will have to support my local movie theater or see it close. Honestly, that might be the only thing that gets me in a theater seat.

For the rest of this year my theater of choice is the living room at Colognoisseur HQ.