Much to their credit the changeover from Jean-Claude Ellena to Christine Nagel as in-house perfumer at Hermes has been a gradual effort. Mme Nagel has been adding new releases to the existing Hermes fragrance collections. Except for one. Perhaps the most important one, the Hermessence collection.

Begun in 2004 by M. Ellena it is the private collection which all designer brands have. It also consisted of the most diverse display of his minimalist aesthetic. The individual perfumes were frequently described as haiku. One of the reasons I was enthusiastic over Mme Nagel’s appointment as M. Ellena’s successor was she had done a version of Hermessence-like perfumes when she was at Jo Malone; 2010’s Cologne Intense Collection. In the press release for that collection she said, “I chose to take potentially opposing ingredients of very high quality to create unexpected yet harmonious fragrances”. Remove the “potentially opposing” out of that sentence and it is a description of the Hermessence aesthetic.

M. Ellena’s last Hermessence was 2016’s Muguet Porcelaine. I was waiting for Mme Nagel to begin her Hermessence collection. In what I think is another smart move Mme Nagel opens the new era of Hermessence with a set of five releases; three are the same eau de toilette concentrations as the previous releases with two additional released in “essence de parfum” concentration. I am going to review all five over the next two days. I’ll start with the three eau de toilette releases today and continue with the “essence de parfum” releases tomorrow. 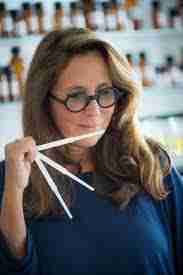 Agar Ebene has had a lot of fuss made about it as being the first Hermes perfume to feature oud. After wearing it I’m not sure that line has truly been crossed. The press release makes a big deal that this is “agarwood” the uninfected tree which becomes oud. Which is sort of the small print to keep the oud pledge still in place. All of that should tell you the star of Agar Ebene is not the agarwood but the other ingredient, fir balsam. Mme Nagel uses a rich version around which, I believe, she wraps a precisely balanced oud accord. It allows for only a touch of the agarwood to “infect” the balsam. There are moments when it smells like the beginning of a leather accord. It ends up making this, unexpectedly, a comfort scent. If you’re looking for a Hermes oud this isn’t the one.

Cedre Sambac is the one which calls back to that desire to take “potentially opposing” ingredients looking for the harmony. Mme Nagel takes a strong cedar and finds that the indolic jasmine sambac doesn’t clash. Cedar is the most pedestrian of perfume ingredients. By taking a fully indolic jasmine and allowing it to grow up the trunk of that cedar. The skanky effect of the prototypical white flower snaking around the slightly green woodiness of the cedar was compelling each day I wore it. It is my early favorite of these three.

Myrrhe Eglantine is a spring rose and myrrh duet. It is my least favorite of the three eau de toilette versions. Some of that is probably because the rose is a slightly spicier take on the typical debutante rose rampant in spring rose releases. The myrrh is a whisper underneath the rose which rises in intensity the longer it was on my skin. I suspect this will be the best-seller among the new collection because it is the easiest to wear.

The three eau de toilette releases are Hermessences but they are recognizably Nagel Hermessences. Which I am happy to see. For where Mme Nagel is really making her mark on the Hermessence collection come back tomorrow for my reviews of the two “essence de parfum” releases.