Now that I am actually spending some time on the back deck here in Poodlesville I am starting to realize I rotate my cocktail mixing cart the same way I do my perfumes. I realized this as I was shaking up my first Daiquiri of the year as I started bringing all the different bottles of rum I have to the front of the line. As I was doing that I was realizing I was already mentally reaching through my mental cocktail recipe book for the drinks I was looking forward to making. If you want some suggestions here are three summer rum cocktails for you to give a try.

I think a daiquiri might have been the first cocktail I ever tasted as a child. I don’t know if that is why I like it so much. I do know it is almost a ritual for me to drink a daiquiri on the first really warm day of the year usually while cooking something on the grill. A daiquri is one of the simplest drinks to make combining rum, fresh lime juice and simple syrup. I came across a variation which has become my current favorite called The Hemingway Martini.

Combine all the ingredients in a shaker and serve straight up garnished with a grapefruit slice. 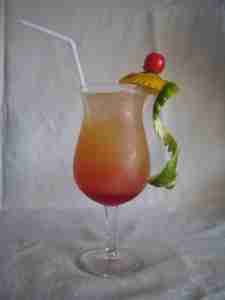 Planter’s Punch is one of the oldest cocktails known. It is also one of those cocktails which has been trampled to death over the years. It is the basis for all of those fruity rum punches you drink on tropical island vacations. What is sad is that the original version of the recipe which came from the very not tropical Planter’s Hotel in Saint Louis, Missouri is really good; especially if you make the effort to use fresh fruit juice. It still packs a kick but you don’t feel like there is sugar crystallizing on your teeth.

3 parts dark rum (I prefer Mt. Gay but any good one will do)

Combine everything but the club soda in a shaker and shake over ice. Strain into a glass over ice. And add an equal volume of club soda. Garnish with a teaspoon of grenadine and a couple dashes of Angostura Bitters. Stir with a spoon.

As the summer goes on we get tremendous thunderstorms which pass through and if I need a cocktail to match Mother Nature’s furious grandeur I make a Dark and Stormy. This is another tropical inspired drink which has been made poorly by the addition of too many extraneous ingredients. It should only have two; rum and ginger beer. If you try that you will make sure to instruct any bartender about to add fruit juice to it to stop.

In a glass with ice add both ingredients and stir. Garnish with a slice of lime if you must have fruit but I won’t do it.

I hope you join me for cocktail hour on your deck or patio with one of these rum drinks.