The first alicyclic musk would be discovered in 1969 by scientists at International Flavors and Fragrances (IFF) and it was called Rosamusk. Even at a fragrance house like IFF, Rosamusk found no enthusiasm for its use despite its interesting rose and fruit character over musk. Rosamusk was so overlooked that older texts on the musk molecules will tell you that it was BASF’s molecule Cyclomusk, discovered in 1975, that was the first alicyclic musk. Cyclomusk gets the press because it is a muskier smelling molecule but it is the fruity floral aspects of Rosamusk which have become the defining characteristic of this class of molecules.

It wouldn’t be until the 1990’s that Firmenich would make the two molecules which have come to represent this class in perfumery; Helvetolide and Romandolide. If you look at the two molecules above you will notice how similar they are and how they were influenced by the molecules which came before. Helvetolide takes the two CH3, or methyl, groups from Cyclomusk and forms a hybrid with the basic structure of Rosamusk. Romandolide takes the structure of Rosamusk and adds on the same molecules at the end that are present in Helvetolide. These are good examples of what all synthetic organic chemists do to produce a desired effect. We look at what has come in the past and if the chemistry allows we will put these fragments together to see if we can make something more useful. What worked in the case of aromamolecules also works in drug discovery. 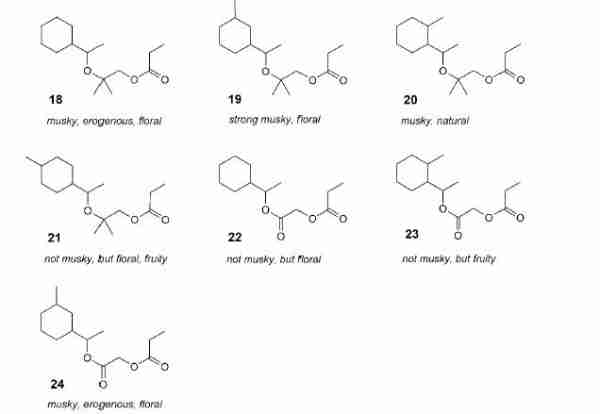 As you see above the structures of these alicyclic musks differ in the nature of the group on the six-membered ring. It can be quite remarkable how just moving the groups around can have a significant effect on the odor profile. In the figure above there is a collection of derivatives of Helvetolide and Romandolide and you can see by the descriptions just how much removing or shifting a methyl group around the ring can have.

As I said these molecules have a stronger fruity and floral character than other of the synthetic musks. One of my favorite descriptions of Romandolide comes from perfumer Frank Volkl who in a 2012 article in Perfumer & Flavorist says, “It’s the marmalade within a fragrance. For me it’s the type of musk that adds a little bit of fun to the fragrance.” I think that is really the most striking aspect of the alicyclic musks as these are the “fun” musks. They still carry that identifiably musky quality but the fruity and/or floral facets make them lighter in both heft and intention. Perfumer Alberto Morillas uses a high concentration of Helvetolide in Lancome Miracle and Romandolide features in Rochas Absolu by perfumer Jacques Cavallier.

The whole story of the musk molecules is perhaps the best chemical story in all of perfumery as it illustrates the developments of synthetic aromamolecules for the last 100 years.