I think everyone who becomes a fragrance lover has that phase where they become highly acquisitive. It seems that there is not enough perfume available to satisfy the desire for more. There is probably something a little obsessive about this but most of us come out the other side smarter about fragrance. One of the lessons I learned while searching through the discount bins was I never knew when I was going to find something which connected with me. Some of my still favorite perfumes came from this kind of olfactory diamond mining. Another thing I would come to appreciate was that there were perfumes meant for people who only have one bottle of perfume at a time. As the man who lost count long ago this idea of one bottle at a time sounds like eating peanut butter and jelly sandwiches every day. I have realized that I am the outlier and most people who buy perfume do it one fragrance at a time. At least according to marketers this is especially true of men. This means masculine marketed fragrances more often attempt to be that Swiss Army Knife kind of fragrance. If the fragrance can be worn to work and the gym and the club that will be a success. I also think a perfume which manages to check all of those boxes successfully is a success and also rarely done well. One of those is Hanae Mori HM. 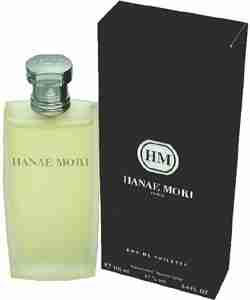 Hanae Mori is a Japanese-born fashion designer. She was one of the very first Asian designers to show in New York in 1965. What is very interesting is it wasn’t until Mme Mori retired from the catwalk scene that she began to put her name on a brand of fragrance. Usually that kind of product grows out of the fashion line instead of being the next iteration. Mme Mori has done things differently. After releasing the first fragrance, Butterfly, and a flanker, Butterfly Eau Fraiche; she would turn to a men’s fragrance. It would have been so easy for her to latch on to the fresh and clean aquatic trend. Instead her vision was to be an early adopter of the gourmand trend started by Thierry Mugler A*Men. In 1997 with perfumers Jacques Lions and Karoline Vieth-Buxton she would oversee a perfume, Hanae Mori HM, which seems to veer all over the place without ever leaving the road. It careens from style to style but somehow it all holds together.

The opening of HM is a classic masculine trope of lemon and lavender. The perfumers use blackcurrant buds to add a sticky green quality which moves into a slightly powdery floral heart of iris, jasmine, and muguet. The perfumers combine these florals with the lavender from the top notes to create a definitive floral but not one which tilts so far as to make a man think about it too much. The final transition is a dusty chocolate accord matched with sandalwood. This is the smell of fine cocoa powder liberally coating the wood. Sweetness abounds. Only a tiny bit of amber tries to counteract this and it provides warmth more than contrast.

HM has 14-16 hour longevity and above average sillage.

HM does feel like three distinct perfumes in one and I imagine its appeal as one fragrance to rule them all stems from that versatility. As a fragrance it is a really nice jack of all trades. You can find bottles of this online or in discount bins for around $20-25.

Editor’s Note: Do not confuse HM with the later release HiM. That later fragrance is an example of when this kind of perfume composition goes all wrong.