Especially with independent perfumers I feel there is sometimes a more personal connection which adds to the pleasure when things click. For as long as I’ve been writing about perfume independent perfumer Dawn Spencer Hurwitz and I have clicked. Her aesthetic along with the meticulous style of composition has always brought a lot of joy to me. Even within the collection of someone like Ms. Hurwitz there are still things which really resonate. It was only recently that I realized my very favorites are ones in which she is inspired by Japan. Bancha has always been the one which would be my “desert island” DSH Perfumes choice. Earlier this year she released the first in her Haiku series Gekkou Hanami which captures cherry blossoms in the moonlight. This has also become a favorite in a short time. In my most recent package of samples there was no doubt I was going to go straight for the latest Haiku called Tsukiyo-en. 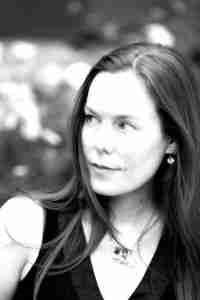 For this second Haiku the theme of nature under moonlight is still present. This time we are in a Japanese garden lined with bamboo as we sip tea while the moon above provides light and shadow. In Gekkou Hanami Ms. Hurwitz captures spring. Tsukiyo-en evokes the middle of summer with everything in full bloom. Walking through a garden at night is a different experience as the humidity of the day dissipates, a little bit. The scent of some of the flowers remains as memory of the daytime while the night-blooming varieties begin their ascendance. On the cusp between waxing and waning floral motifs is where Tsukiyo-en balances itself.

Our walk opens with a Japanese variant of mandarin orange called mikan. It has a bit less of the sugared effect while still being recognizably citrus. The watery green woodiness of a bamboo accord comes next. It captures the cooling of the day with a hint of dampness. The light green wood which is the focus of the accord acts as a frame for the nighttime scents to be contained within. The moonlight effect comes as certain notes seem to be caught in a moonbeam only to retreat into shadow. There is a specific herbal mint note that acts as a will o’the wisp throughout the middle phase of Tsukiyo-en. The floral notes of the garden all lilt softly and transparently. I found jasmine, champaca, violet, and rose most prominently but there were others acting similarly to the way the mint did. A delicate white tea accord provides a centering place among the flowers. It is joined by an earthy patchouli to represent the soil.

Tsukiyo-en has been a perfect choice for the summer. I have spent a few nights on the deck at Chateau Colognoisseur lost in meditation; gathering in the magic by moonlight. I am hoping fall and winter have some moonlight haiku to come.

Disclosure: This review was based on a sample provided by DSH Perfumes.