Now that Thanksgiving has passed, I begin to queue up my favorite Christmas movies. Like everyone else I’ll watch the classics sometime over the next month. I also have a list of some different Christmas movies which are less about the spirit of the season. These are darker fables with a bit more bite to the moral of the story. One of these which I break out early in the season every year is the 1984 film “Gremlins”. 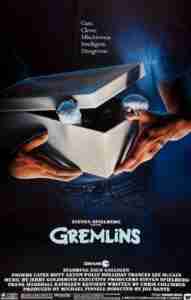 Gremlins was directed by Joe Dante. Mr. Dante had been known for low-budget horror films “Piranhas” and “The Howling” before producer Steven Spielberg asked him to direct the comedy horror script written by Chris Columbus. It was released in the summer of ’84 on the same weekend “Ghostbusters” premiered. Both movies would show there was an appetite for some funny to go with your scares. Gremlins would be the fourth highest grossing film of the year; two slots below Ghostbusters. Even though Gremlins was a summer movie in regard to its release date the story itself takes place on Christmas in the small town of Kingston Falls.

The story is a simple one; that a father who has been too busy promoting his inventions away from home wants to give his son a fantastic present. The father steals a one of a kind creature called a Mogwai from a shop in Chinatown named Gizmo. When he presents it to his son, Billy, he repeats the three rules you know will be broken over the next thirty minutes. Don’t get the Mogwai wet. Do not expose it to bright light. Do not feed it after midnight. The last rule is the funniest. Isn’t it always after midnight? On a snowy Christmas Eve the rules are broken unleashing the violent versions of the cute Gizmo led by Stripe. The rest of the movie is Billy trying to find a way to rid the town of the pests while they spread out around town wreaking havoc. 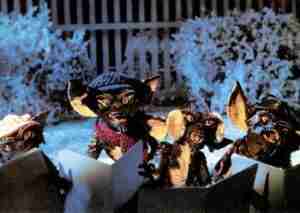 What makes it a Christmas movie is the monologue from Billy’s girlfriend Kate which happens towards the end of the movie. It is a macabre story of how her father died on Christmas Eve which is why she hates Christmas. That she will be part of the team which solves Kingston Fall’s Gremlin problem is a perfect Seasonal moral.

While there are truly scary moments. The scene where Billy’s mother defends her kitchen from one of the gremlins is a classic as her weapons are all the things you find in a typical kitchen. There is a wink here to a woman defending “her” turf. It is the comedic elements overlaid atop that which makes Gremlins such a favorite for me.

Once the Gremlins get out of hand, we see jokes all around in the way they are dressed. From a set of Christmas Carolers to a group of card players all cheating. There are sight gags everywhere to be seen and giggled at.

If you need something that will give you a different Holiday charm, put a shot of brandy in the egg nog, queue up Gremlins, and settle back for a new Christmas addition to your movie list.