I sometimes get an e-mail from a reader asking me, “What’s the point of flankers?” Trust me when I receive them in the mail that is something I ask myself. The cynical answer is the large companies are trying to part consumers from their money who feel brand loyalty. It is probably closer to the truth. Yet I have observed there might be a more positive perspective to have on flankers.

When I give someone a perfume to try on a strip and they tell me they don’t like it; I ask why. The most frequent answer is there is one thing which doesn’t make them happy. Too floral. Not floral enough. Too sweet. Too strong. A flanker can address this by making the one small change which might bring in someone who was put off by something in the original. This was my frame of mind when I received the two latest flankers from Giorgio Armani. 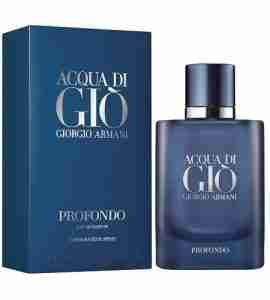 To their credit Giorgio Armani has not overexposed Acqua di Gio by releasing a ton of flankers of the 1995 original. It is also commendable that they have been clearly different from each other. The original was one of the early uses of Calone as the source of the sea spray beachy quality. The big difference in Acqua di Gio Profondo is the use of an analog called Cascalone. This is a deeper version of the sea with a more concentrated effect. It is what perfumer Alberto Morillas uses in the opening moments. Lavender replaces jasmine from the original. The lavender goes well with the Cascalone in creating a slightly darker shade of fragrance. It ends with a mineralic accord in the base,

If you were someone who found the original Acqua di Gio too fresh and clean; Profondo is just a shade less of both. 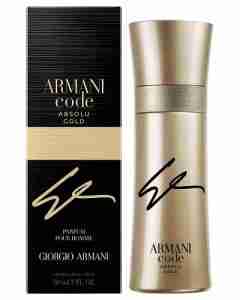 With Armani Code the brand doesn’t seem as protective; releasing nearly a flanker a year since its initial release. That kind of process leads to a cynical view. All the Armani Code flankers have been offshoots of the original’s woody Oriental construction. I had easily ignored them until last year’s Armani Code Absolu which did change things. I wasn’t fond of an odd boozy accord in the middle but I appreciated the effort to try something new. This year’s version Armani Code Absolu Gold makes a change which made me like it much more.

Perfumer Antoine Maisondieu was behind both of the Absolu versions. In Armani Code Absolu Gold the booze is replaced by a fantastic iris and saffron heart. This flows much more naturally from the crisp fruits of apple and tangerine on top into benzoin and tonka bean in the base. It is difficult to get the floral balance right in a perfume marketed to men. I think if you are looking for a subdued floral for a change of pace and you like the Armani Code DNA this is a good alternative.

Disclosure: This review is based on samples provided by Giorgio Armani.