Currently the names that are given a fragrance can have such a disconnect that I wonder if the marketing team actually smelled the perfume before designing the campaign. Back in the 1970’s and 80’s the names pretty much carried a truth-in-advertising realism to them. One of the most classic men’s fragrances of all-time is Geoffrey Beene Grey Flannel. Like a finely tailored pair of pants Grey Flannel provides a sharply drawn perfume and one of the early versions of a masculine floral. Even though it can be found on the bargain shelf it is still quite the classic. 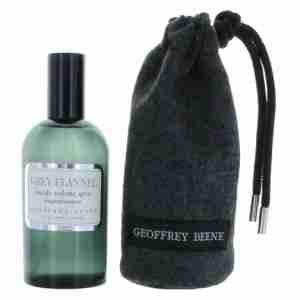 Grey Flannel opens with a very green herbal set of top notes. Sage is the core around which M. Fromentin adds in galbanum and violet leaves. The use of the silvery green violet leaves make this opening a bit too much for many. The authority it carries definitely stamps it as a product of the 70’s. M. Fromentin then brings the violet forward and it is supported by iris to give depth. As this combines with the top notes it forms a freshly mown grass accord. As it develops over a few hours the violet becomes more prominent. Much later on a bit of cinnamon adds some zip. As Grey Flannel heads into the base it plays it very safe with a mix of sandalwood and oakmoss.

Grey Flannel has 16-18 hour longevity and prodigious sillage. This is one you need to be careful applying or you will have a visible vapor trail.

Grey Flannel despite being a product of its time does not feel dated. It feels odd because in today’s ocean of fresh sporty men’s fragrances it is so different. If you’re looking for a change-up from those kind of fragrances you can find a 4oz. bottle for less than $20. Hard to go wrong at that price. It is one of my favorites of the powerhouse perfumes from that time period.