I’ve written a lot in this column about how much the right characters can make me overlook a lot of plotting flaws. If I enjoy the time I’m spending with the characters what’s an improbability or two? Like many who were big fans I watched Stranger Things when it was first released. The thing was I was more enthralled by the quilt of obvious 1980’s “inspirations” The Duffer Brothers were employing. It felt like I had watched a greatest hits of 1980’s genre movies by the time it was done. I enjoyed it but thought one season was going to be enough. I thought the characters had not connected over the nostalgia. After the New Year my Netflix queue was surprisingly clear. I thought I’d watch a couple of episodes; remind myself why I had checked out and be done. Nine hours later I sat there surprisingly satisfied. 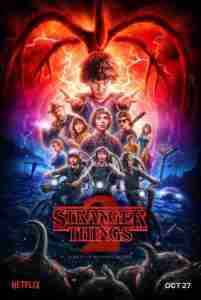 It wasn’t because The Duffer Brothers stopped using the 1980’s as plot devices. I would say Stranger Things 2 was even more obvious in what they cribbed from. What hooked me were characters who I didn’t realize snuck up on me in the first season. They were given lots to do which kept me wanting to see what was next. I want to call out a few of them because the actors behind the characters did such a good job.

First is Gaten Matarazzo as Dustin. To get an idea of how charming he is you only must see him in the Verizon commercials extolling the virtues of FiOS. In 30-second clips the actor makes you smile and sells the service with that charisma. In Stranger Things 2 he is given the Gremlins sub-plot where he brings a strange creature home and as it grows things get out of hand. The other half of his story is his bond with the older high school boy, Steve. Dustin is from a one-parent home and Steve takes him under his wing. Mt. Matarazzo steps up and becomes the heart of the Stranger Things series. 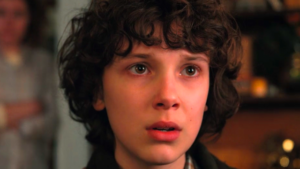 The soul is Millie Bobbie Brown who plays Eleven. A child who was experimented on to hone her telekinetic properties she escaped the government at the end of season one. Season 2 finds her in a safe place one which is explained over the first few episodes. Once she decides safety is less important than understanding who she is that propels her last half of season 2. Ms. Brown does all of this with an earnestness which had me rooting for her while also lamenting her leaving her safe place. 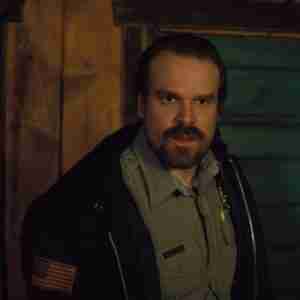 David Harbour plays Chief Hopper who is always caught in the middle as the weird ratchets up in his small Indiana town. In season 2 he is much more the linchpin which holds it all together. He has relationships to every other character in the cast. That allows Mr. Harbour to highlight that. From telling hard truths to the kids to making the adults understand the stakes. He admits his flaws while standing in front of the danger.

Finally, Winona Ryder as Joyce Byers the frazzled single mom who has her son being taken over by the monsters in both seasons. I have always thought highly of Ms. Ryder as an actress. In season 2 her fiercely protective mother has found some happiness, but those moments are fleeting in the Stranger Things universe. Ms. Ryder shows the joy and the pain in equal amounts sometimes within a few seconds of each other. She has a showcase where her talents are fully on display.

These four characters and the actors who play them made me realize how much I am enjoying Stranger Things for them and not the plot.