As this column has pointed out many times in the past, I am a wine guy. Like my perfumes there is a season when I tend to drink more beer, the height of the summer. The taste of a great beer on a hot day is unrivaled by anything I can find in a wine bottle. Like many my summer beer offerings developed with the availability of the Mexican beer Corona. When it first made it to the US, I was like everyone else pushing a slice of lime down the neck of the bottle. What made it so popular is it was a refreshing version of regular beer.

As the craft beer revolution took hold every small brewery came up with their version of a summer style refreshing blend. I am fortunate to live close to two of the best breweries in the country, Flying Dog and Dogfish Head. These guys go out of their way to produce amazing summer brews. Both ones I’ve had in the fridge hearken back to that first bottle of Corona with a much tastier version.

Flying Dog is the brewery which is best known for having illustrations by artist Ralph Steadman on their labels. For those who know that name it is because Mr. Steadman also did the illustrations for gonzo journalist Hunter S. Thompson’s books. That he illustrates a brewery that also seeks to push boundaries fits.

My summer selection from them has been “Numero Uno”. It is labeled as a Mexican lager. I read that as “Corona-like”. It is much better than that description. The quality of the German malt and hops used give this much more character. It is also brewed with the lime zest already included so I don’t have to waste time cutting a lime for the same citrus tinted beer I want. 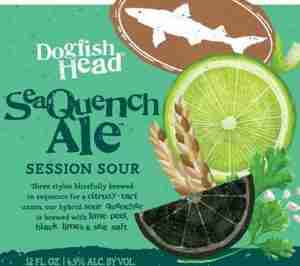 The same idea is found in Dogfish Head SeaQuench Ale. When Corona first showed up people might ask, “why not just get a margarita?” The brewers at Dogfish Head asked what a margarita-like beer might look like.

In their hands it is what they call a “session sour” where three types of beer are blended together; Kolsch, Gose, and Berliner Weiss. I don’t know the names either but they tell me they impart crisp, salty, and tart respectively. That blend is infused with sea salt and two types of lime. The result is something closer to margarita with a foamy head than a Corona.

Even though these are my local breweries both are available nationwide.