When I was in High School I listened to everything when it came to music. Even as I searched for the alternative I was still drawn to the mainstream. Which mimics the way I thought about fragrance in my early days. Forty years ago today, one of the albums which would be on my personal top 10 was released; Rumours by Fleetwood Mac. 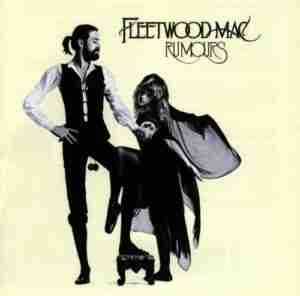 I had “discovered” Fleetwood Mac a couple years earlier when they released an album titled “Fleetwood Mac” I thought this was their first album only to have a friend of mine show me the nine(!) previous albums they had released.  The name of the band comes from the names of the two founding members drummer Mick Fleetwood and bass guitarist John McVie. From 1968 until 1974 the band was a blues driven outfit which like all long-time bands had a fluctuation in their membership. In 1969 Christine McVie, wife of John, would be added. In 1974 the next line-up change would be the one which shot the band into the spotlight. Guitarist Lindsey Buckingham and his girlfriend vocalist Stevie Nicks were added. They released the album I mentioned earlier “Fleetwood Mac” in 1975. This time the music was very different. The band had been evolving into a more guitar driven sound before Mr. Buckingham’s arrival but he took it up a few notches. The addition of Ms. Nicks’ ethereal vocals beside Ms. McVie’s soulful version gave different outlets for the song writing to take advantage of. That 1975 album put them on the map with three top 10 singles and their first album Number One. The band was on its way.

Except the cost of success was the relationships within the band. By the time they got together to record the follow-up album the McVie’s were splitting up and Mr. Buckingham and Ms. Nicks were also doing the same as Mr. Fleetwood’s marriage also disintegrated. Musicians are at their most insightful when they reflect their personal into the music. As they began to record, the songs that were being written were all about this emotional turmoil. Lots of bands would have pushed it to the background. This band chose to use the genuine emotion to make one of the greatest albums ever, Rumours.

The songs were direct shots right at the heart of the target; standing right next to them. Mr. Buckingham tells Ms. Nicks she can “Go Your Own Way”. Ms. Nicks looks to the future on “Dreams” which became the biggest single on the album. Ms. McVie sings about her new boyfriend in “You Make Loving Fun”. There are songs for love lost Ms. McVie’s plaintive “Songbird”. “Gold Dust Woman” refers to the cocaine use which was also fueling some of the band’s interpersonal problems. Despite all the songs which highlighted the things that were driving them apart my favorite song on the album is “The Chain” which is about what kept them together in the band.

The Chain is the only song which is credited to the entire band. It was assembled from different pieces of other songs. Because of that each member of the band shines. The basic structure is a piano verse section by Ms. McVie. The bass-laden bridging sections is Mr. McVie at his most inventive. Mr. Fleetwood, who I consider to be one of the greatest rock drummers, provides the heartbeat with a steady metronomic drum beat. It all leads to Mr. Buckingham’s guitar driving the final section. Over all of it are the lyrics and vocals of Ms. Nicks who “damn your love, damn your lies” knows “I can still hear you saying, you would never break the chain” as the song ends with the knowledge that the “Chain, keep us together/running in the shadows”.

The Chain encapsulates the experience of overcoming the personal to stay together for the music. Rumours is a great album because these five artists were able to do that brilliantly.