When it comes to musk it is not like we as chemists don’t know the chemical structure of the natural source. In 1926 Leopold Ruzicka isolated and chemically identified the molecule found in the musk deer which primarily gave musk its smell and he called it Muscone. 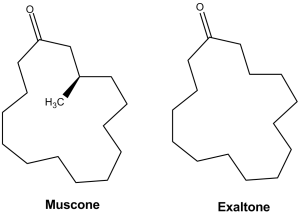 In the structure above what you see is a 15-membered ring of carbon and importantly the bold wedge attached to the CH3 represents a methyl group which is coming up from the plane of the page. If that wedge was dashed that would indicate the geometry was going behind the plane of the page this is how we show three-dimensional geometry on the page. This orientation is very important because if that wedge was dashed and the methyl group was oriented differently the odor profile of muscone is significantly lowered. It is exactly the difficulty of getting this geometry just right that gives synthetic chemists so much difficulty in making molecules easily. In 1926 Dr. Ruzicka didn’t even try because he discovered if you just leave the methyl group off and  synthesized the rest of the large ring you still had an acceptable musky profile. Thus was the first synthetic macrocyclic musk created, Exaltone. 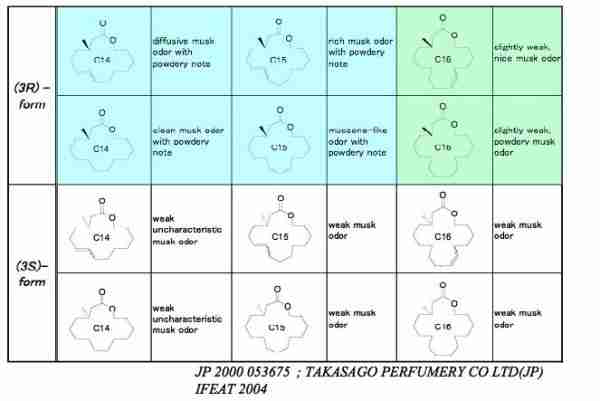 These all-carbon large rings were difficult to synthesize but if you replaced one of the carbons in the ring with oxygen or added additional oxygen, those were much easier to make. These molecules are called lactones and the smaller versions of these also play a large part in perfumery.  As you can see in the table above the same issue with the muscone still existed as if the methyl group was pointed away the odor profile was much more muted.

The big breakthrough for the all-carbon macrocyclic musks came in the 1990’s when Prof. Robert Grubbs published a technique called catalytic ring-closing metathesis. That’s a lot of words but what it comes down to is now there was a chemical reaction which allowed a synthetic chemist the ability to form almost any size carbon ring imaginable. This is one of the most powerful synthetic methodologies of the last thirty years and Dr. Grubbs received the 2005 Nobel Prize in Chemistry for this work. It fired the imagination of chemists everywhere and in the fragrance industry it sparked a bit of a race into which firm could produce and patent the best synthetic musk.

As for the use of these macrocyclic musks these are the musks most commonly referred to as “white musks”. The term was coined by perfumer Alberto Morillas as he combined a number of these musks to create a “cotton and linen” accord for Emporio Armani White for Her in 2001 and called it a white musk accord in the press release. M. Morillas would use the same white musk cocktail in one of my all-time favorite fragrances Thierry Mugler Cologne later that year.

These musks are also the musks that some people are not able to discern in a fragrance. We term that as being anosmic to musk but that is far too general a term. These very large molecular weight molecules hold a special property that we don’t understand very well which causes certain people to not detect them. The same people who can’t detect these macrocyclic musks can often smell either of the polycyclic or nitro musks and anosmia to those is far less common.