There are a set of perfume brands which seem to have stopped making perfume only to surprise me after a long hiatus. This happened last year when I realized the fashion brand Costume National was releasing two new perfumes after having gone five years since their last new release. Costume National J is the one which caught my attention. 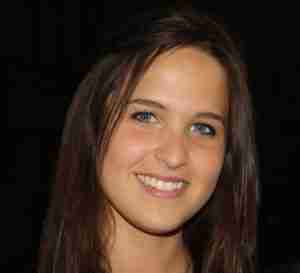 The two new fragrances were given the initials I and J. They stood for the two countries which influence the clothing, Italy and Japan. Creative director Ennio Capasa wanted to make a set of perfumes which captured the different senses of style. For I he turned to perfumer Julien Rasquinet who produced an ambrox-heavy powerhouse which overwhelmed me on testing. With J he asked perfumer Fanny Bal for something much lighter in tone. This is the canard of perfume for the Japanese market needing to be minimal and transparent. I have enough evidence to know that isn’t as true as it is taken to be. I also have found perfumes which do take that hypothesis as basis for design to make something great. Which is what happens with J.

Mme Bal chooses to work with the most iconic perfume ingredients associated with Japan, cherry blossom (sakura) and rice. What she fashions out of this is a perfume of delicate opacity like a scented sheet of rice paper in a shoji.

It begins with a delicate neroli and lime top accord. The citrus is feathered in with the neroli such that it picks up the green aspect of the neroli. This is isn’t that bright sunlight kind of citrus accord. It is the sun as shining through a pane of rice paper. The delicate sweetness of cherry blossom appears next. Mme Bal has fashioned a gorgeously delicate accord. It lilts in a soft breeze with puffs of fragile floralcy. The base provides the starchy contrast of rice. I giggled to myself it was a bit like cherry blossom sushi roll occasionally. It works to provide some structure to a fragrance which has been so transparent. Cashmeran adds in the woody crosspieces to this cherry blossom scented shoji.

I have been enthralled with J since I got my sample a few weeks ago. It allowed me to experience the local cherry blossoms even though I couldn’t. I sat cross-legged on my tatami breathing in my sakura scented shoji.

There have been many designers who have entered the niche perfumery category. They all looked to be the next Comme des Garcons. I can safely say that nobody has come close to that record of success. In the early 2000’s there was an interesting contender which had some similarities; Costume National. 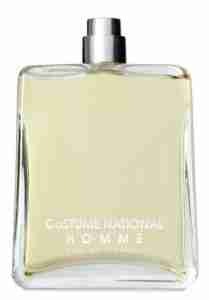 Costume National was also a fashion line appealing to a young trendsetting clientele. The founder Ennio Capasa carried that slim silhouette from working in Japan at Yohji Yamamoto fusing it with Milan details. In 1986 it was a sensation which put it on the map. They would become known for a cutting-edge aesthetic which they wanted to spread out into accessories. Starting after the turn of the new century Sig. Capasa added fragrance to the brand portfolio. The very first release in 2002, Scent, was a brilliant encapsulation of the brand. Working with perfumer Laurent Bruyere they would follow that initial triumph with a collection of Scent with five flankers over the next three years. Each was interesting with Scent Intense being the best of the bunch. Just when it seemed Costume National was ready to accelerate they pumped the brakes. Releasing two new perfumes over the next four years. It is that 2009 release Costume National Homme which is my choice for this month’s Under the Radar.

For this release Sig. Capasa changed perfumers from M. Bruyere who had done all the Scents to Dominique Ropion for Homme. I would also venture that Sig. Capasa had tired of being risky because while there are some hints of the aesthetic which runs throughout the Scent Collection it is greatly attenuated. If this column was on creativity it would be one of the Scents which was its topic. Instead it is about one of my favorite cold weather comfort perfumes.

M. Ropion has most of his recognizable signatures on display in Homme. Sandalwood, spices and resins do what you come to expect in one of his perfumes. The twist here is there is an odd synthetic oily accord which oozes through the familiar. That’s what ends up making it Costume National.

A brief flare of citrus via grapefruit and bergamot open things up then cardamom combines with cinnamon to provide a typical spicy top accord. It is here the oily accord appears. The best description I have seen of it was from a Basenotes reviewer “rogalal” who thinks it smells like fake movie theatre butter. I’m not fully in agreement but I don’t have a better shorthand for describing the accord. Once you get underneath that the labdanum, cloves and thyme add a spicy resinous accord which is very comforting. Patchouli and sandalwood are the base accord.

Homme is much more comforting than a perfume from Costume National ought to be, except for the oily accord in the middle, it never challenges. Nevertheless, this has been a winter staple ever since I bought a bottle in 2009. If you’re looking for a new brand to explore or need a new cold weather comfort scent, try Costume National Homme.

One of the fun things about having amassed so many bottles of perfume is when I run across a bottle I have not thought about for a while. In the week between the Holidays and the New Year I was doing some rearranging of the perfume vault. While doing this I came across a rank of squat bottles in different shades of color. I smiled and thought to myself, “Ah Costume National I had forgotten about you.” Part of the reason for that is there hasn’t been a new release in eighteen months. Which is a far cry from the beginning of the brand which those bottles I had rediscovered represent. 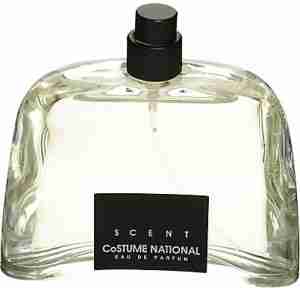 Costume National was the Italian fashion version of rockstar couture. In 2002 it was riding high as one of the hip new brands. Founded by Ennio Capasa, in 1986, these were the clothes the cool kids were wearing. As they made the move in to fragrance Sig. Capasa was going to also want to make the perfume for those same cool kids. His choice of perfumer was Laurent Bruyere who was also an artist coming into his own in 2002.

Over the next two years Sig. Capasa and M. Bruyere would collaborate on the simply names Scent collection. The five releases: Scent, Scent Intense, Scent Sheer, Scent Gloss, Scent Cool Gloss comprise one of the most coherently designed sets of fragrance I own. Having the chance to look back at them I realized the one which drew me the strongest was the first one, Scent. 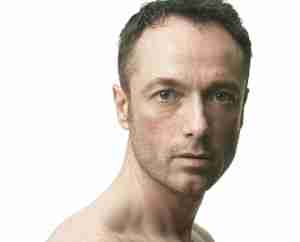 The idea behind Scent was to make a radiant floriental. What made it very interesting back in 2002 was the choice of the floral keynote of hibiscus. Hibiscus is an odd floral to work with. It is most well-known in its tea form. M. Bruyere uses that form before introducing us to the flower itself. The transparency with which the hibiscus is presented is what makes Scent as interesting to me.

M. Bruyere opens Scent up with the hibiscus tea with some cardamom added. The hibiscus tea accord has a bit of berry-like tartness. The cardamom provides a bit of the same from the spice rack. The heart is where the hibiscus itself comes out. It has a fairly thin scent profile but what is there is the same sort of snappy floral quality and the aforementioned berry facet. By itself it would be less interesting. M. Bruyere makes sure not to let that happen by using jasmine and rose to supply the depth Mother Nature did not. This is as light as a silk scarf. It is a beautifully realized heart accord. The base accord consists of ambergris, sandalwood, and vanilla. This is kept at the same intensity of what came before which means it is still gauzy and expansive.

Over the next four releases in the Scent collection M. Bruyere would further explore the nature of the floral heart accord trying different variations; all of which succeeded to me. After finding the bottles I spent the rest of the day wearing Scent. It made for a day of happiness in my cloud of hibiscus.