It seems like the mid 1960’s has become a fertile ground for storytellers recently. It was certainly a time of great social flux which makes for conflict to arise more readily. These stories have also become a way of looking back and assessing whether we have really advanced in the fifty-odd years. A debut novel by author Emma Flint, Little Deaths, provides one of the most recent examples of this.

Little Deaths is set in 1964 Queens during the summer. Single mother Ruth Malone puts her two children, five-year old Frankie Jr. and 4-year old Cindy, to bed only to wake up and find them missing. The first part of the book is the search for the children. The middle part is the mystery of whether Ruth was responsible. The final part is the culmination of tabloid reporter, Pete Wonicke’s investigation. 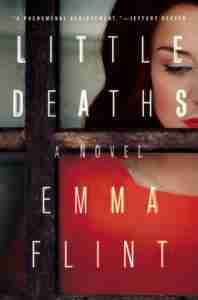 Little Deaths is not a spectacular mystery. It is quite obvious who committed the crime early on. The story is more about Ruth and how a single mother was viewed in 1964. Ms. Flint paints Ruth with a compassionate brush even though some of her life choices are reckless. It shows how there was no formula for a single mother to know what to do in those days. She was already under suspicion just for not having a father around.

Ms. Flint also really understands the New York City psychology of living in a borough that is not Manhattan but yet close enough to see the skyscrapers. I know Ms. Flint is British but I have to assume she spent some time in Queens to portray this so well on the page.

Pete Wonicke while not as vividly depicted as Ruth is present to provide the look at tabloid journalism fifty years ago. The same tactics of innuendo, morality, and sensationalism as part of a journalistic rush to judgement hasn’t really changed; just moved to cable TV. Pete is one who realizes there might still be a criminal out there when the sideshow which has decided the harlot was guilty has moved on.

I found Little Deaths to be a real page turner and I was through it very quickly. It shows a real skill at character building by this first-time author. If she is going to stay in the mystery genre I would advise she spends some time improving that aspect of her plotting. Come to read Little Deaths not for the mystery but for the sharply written characters. Ms. Flint may find it easier to get to Manhattan than Ruth if she gets better from here.