One of my jobs while I was in college was working at a local independent newsstand/bookstore. It was a place where I had a wonderful seat to observe the world from. The store attracted all kinds and I enjoyed talking with them if they were interested in that. One group of customers fascinated me.

At the beginning of every week we got a new shipment of Harlequin Romance novels. By the end of the week this rack was usually empty. There was an audience that just couldn’t get enough. My curiosity was piqued enough that I took one of the damaged books we were going to return and read it. There was a lot of emotional foreplay which would lead up to a crescendo of clothes being ripped off. The industry name for these types of books in the 1980’s was “bodice rippers”. I found my very casual foray didn’t make me interested in reading more.

Over the next few years there was an expansion of this style of writing into larger popular fiction. Many television adaptations were made of these. The general impression was this was what romance novels were all about. I haven’t really thought about this at all until I watched the Netflix series “Bridgerton”. 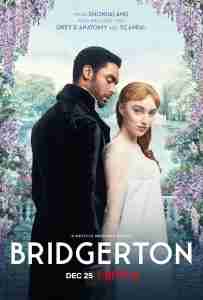 Bridgerton is the first series by producer Shonda Rhimes in her huge Netflix deal. It is based on a series of books by Julia Quinn. What Ms. Rhimes does is to take her source material and expand it into a multi-racial cast. She uses the idea that Queen Charlotte was descended from Moors and had darker skin. As such the series allows her to use her position as Mad King George remains out of sight to create a more diverse court. It is this which got many, including me, to watch.

I found the overall story more engaging than my reading of decades ago. Yet there were still many of the same conventions even with a less uniform skin tone present. I finished it feeling like it was a nice step forward. Thinking it was representative. Until I asked my friend who writes in the genre about it. She and many of her colleagues are less happy about it because they feel it is not representing the current state of romance fiction.

This was something I knew well. When Star Wars came out in 1977 there was a popular perception that was science-fiction. It was but it mostly was not. Even George Lucas called it “Wagon Train to the stars” after the popular Western themed TV series. When friends asked me for books to read, I made the mistake of giving them the science fiction of ideas over action. Philp K. Dick, Isaac Asimov, Robert Heinlein, etc. were not Star Wars they were what the genre really was. But now the world saw Star Wars as science fiction. I found I could give my friends something which was a little bit the heroism of Star Wars and retained some of the core of what the genre really was about. Frank Herbert’s “Dune” became one of my most loaned books in these days.

It didn’t take too long for things to start to change as movies like “Blade Runner” would follow. Over time the idea of “hard” science fiction found its place even while the “space opera” genre also thrived.

I asked my friend for someplace to look to find the type of romance novel of today which was not represented by “Bridgerton”. She pointed me to author Eloisa James. I downloaded the first book in her most recent series “Wilde in Love”.

It has several similarities with “Bridgerton” in broad strokes. The hero is returning home on a wave of reputation. He is reluctant to find a woman yet one catches his eye. They begin a typical back and forth over whether they can be who they want to be while living up to what others expect them to be. Except Ms. James’ has a different idea of romance which doesn’t entail the ripping off of clothes but the opening up of one’s heart and emotions. Both end up in bed, but the novel makes it feel different.

Unlike the one-off of the Harlequin Romance, I’ve read the additional three books currently in the series. This is why having anything representing any genre through popularity is problematic. Bridgerton is fun but it doesn’t represent the current evolution of romance fiction.