When I first moved to the Washington DC area I had the opportunity to attend a fantastic event at the end of October 2012. There was a reception for two of the men behind the perfume brand Arquiste; owner-creative director Carlos Huber and perfumer Rodrigo Flores-Roux, at the Mexican Embassy. The night was about how these proud Mexicans love to add a little of their home country to every perfume they collaborate on. That sentiment is best represented by a quote from Sr. Flores-Roux on that night, ““Maybe I can cite a Mexican poet, Carlos Pellicer, who always praised the beauty of the Mexican tropics: the Mexican people have two obsessions: we are interested in death and we are in love with flowers. And as a Mexican flower lover, I always like to put a bit of Mexico in every perfume I make. It's not an accident I studied biology, specifically botany, and understand the secret language of flowers. It's also my last name!” 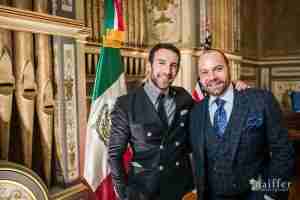 Ever since that night I have always looked for that bit of Mexico in the perfumes Sr. Huber and Sr. Flores-Roux have composed for Arquiste. At the end of last year Sr. Huber told me of a new collection Arquiste was releasing in conjunction with an upscale department store in Mexico; El Palacio de Hierro. Three perfumes all composed by Sr. Flores-Roux. This was something I very much wanted to try but I couldn’t buy it off the website. I then had to cast a wide net to find someone who could bring me back a bottle of the one I was most interested in, based on the description, Esencia de El Palacio Azahares. I was successful towards the end of the year with the bottle arriving soon after the New Year.

The concept behind the perfumes was for them to represent the past, present, and future of Mexico. For more about that you can follow this link to the website in Spanish. Magnolio is meant to be the past. Vetiveres is the future. Azahares is meant to be modern-day Mexico. The concept is nice and I have no idea about the success of the other two at evoking the desired feel. I do know that Azahares is a fabulous contemporary floral full of the flora of Mexico. 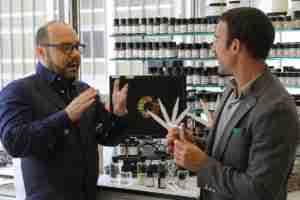 Rodrigo Flores-Roux (l.) and Carlos Huber collaborating in the lab

Sr. Flores-Roux is an extremely versatile perfumer and I believe he can make a perfume out of paste, vinegar, and yeast; if he had to. Yet as the quote I used above illustrates there often seems to be a more intimate style of composition when he works with flowers. Azahares is Sr. Flores-Roux working at the top of his game with the ingredients of a “Mexican flower lover”.

Azahares is made up of three phases all with a floral at the core of the accord. In the top it is orange blossom which he swaddles in a blanket of lemon balm, orange, and lemon leaves. The citrus is present without becoming overwhelming. This allows the orange blossom a chance to peek out and assert a bit of its indolic core. Also, a bit of its green which the lemon leaves amplifies a bit. As Azahares transitions to the heart cassis forms the connection as the green facets from the top are carried forward to a deep lavender. That floral is accentuated with clary sage which with the cassis provides a stronger green but as with the citrus in the top Sr. Flores-Roux makes sure the flower does not get obliterated. The final accord is a deeply beautiful iris which Sr. Flores-Roux grounds in a botanical musk accord of ambrette and angelica. That natural musk opens up the earthy quality of the iiris.

As I wore Azahares I realized that it is the culmination of the pride of two Mexican artists which has overflowed into a beautiful representation of the country they love.