One of the more interesting panels at Esxence 2016 asked the question about whether criticism and judging are different. Through the course of the panel Dr. Marlen Elliott Harrison, Managing Editor at Fragrantica, spoke eloquently on how criticism is all context. From the author’s perspective through to the reader’s. There is a connection which is forged over time reading a particular critic as you learn their frame of reference.

This lead into the flip side of the coin…judging. As a judge almost all of that context has to be stripped away to offer a fair competition. As a finalist judge for the upcoming The Art and Olfaction Awards I experienced it first-hand.

When I write a review I look for context often starting with whatever press materials I receive. Those often give me a clue as to what is being attempted. There are times where it is a good match. There are times I am left scratching my head. If I like the perfume on a base level, I am willing to ignore press copy which doesn’t make sense. Although if it does make sense it is likely to find its way into my review.

From there I will think about how it fits within its genre. Within the body of work of the brand or the perfumer. This is all context for communicating about perfume.

None of this applied when I was sent 20 clear vials with generic codes on the side to be judged. I went from communicator to evaluator. It was not an insignificant change. It brought the analytical scientist right to the front and stuffed the purple prose communicator into a locker. I was being asked to evaluate in four distinct categories. To keep the data as clean as possible I did not read the accompanying descriptions until I judged the first two categories; first impressions and wear-down. This gave me the most information-less opportunity to compare the perfumes. 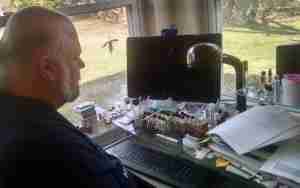 Me during the first phase of judging

I found this process fascinating. Stripped of sign posts my job was to decide whether I thought each of the finalists were well constructed. Did they succeed in being a perfume? Were there degrees of differences between the finalists. I did manage to find differences which I felt confident about using to comparatively score but the anonymity made it so different from my usual evaluation of a perfume.

The final two categories allowed for some context to creep back in. Intentionality was judged on how the perfume performed in relation to a description provided stripping out any brand identifying information. With some context added back in I felt like I was back on familiar ground. Still judging and having to reconcile brief descriptions with ones three or four times longer I was still more scientist then writer.

It was only in the final category X-Factor where we were asked to let anything else we thought to be important to be weighed that my usual context returned. Now my communicator was pulled out of the locker a little the worse for wear but finally given an opportunity to add to the process. It was here where I did think in terms of how the entire package came together. With all of the context added back in I had another score to provide.

This opportunity to see both sides of the criticism/judging coin was illuminating. I think I want to make sure going forward when communicating that the judge and the critic find a way to co-exist.