When I started widening my fragrance horizons, I had some stupid rules. One of them was I didn’t want to try any aquatics. Through the nineties and early oughts that seemed to be the only masculine style mainstream brands were interested in. During these early days I became a regular at the perfume purveyors in Boston. One of my favorite sales associates was Roberto at the Copley Place Barney’s New York. I liked him because he paid attention while also nudging me towards things I wanted to ignore. He also knew I liked hearing the stories behind the brands. One afternoon he showed me i Profumi di Firenze Brezza di Mare and my dopey rules became moot.

The story behind the brand is fabulous whether it is true or not. The tale begins with the once in a century 1966 flood of the Arno River in Florence. After the waters receded brand founder and perfumer Dr. Giovanni di Massimo began looking through the wreckage. He found in a sealed basement the perfume recipes of Caterina de Medici from the 16th century. Dr. di Massimo would take one of those recipes and release the first perfume named after Sig.ra de Medici. For over twenty-five years the brand has been making excellent fragrances. 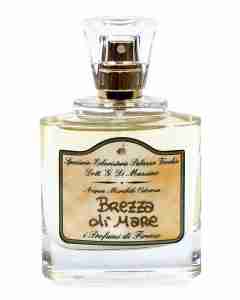 Brezza di Mare managed to break through my resistance to the aquatic genre despite using one of the keynotes of it. Dr. di Massimo overwhelms that Calone in enough other attention getting notes I didn’t mind its presence.

One of the hallmarks of my favorite aquatics is a heavier concentration of the ozonic sea spray notes. Growing up on the beach the scent of my sun-warmed skin with a crust of salt from the dried sea water is where I want a perfume to go. Brezza di Mare begins with that. It always makes me smile when I wear it because of it. The Calone comes next but not by itself. A full bouquet of white flowers come along for the ride. Calone usually has a strong watery melon quality. Because of the white flowers that is swept up in their exuberance. It attenuates the things I am not fond of while letting the things I do predominate. From here it takes a warm turn with vanilla and white musk forming the base. This is what really makes this so appealing. As the vanilla finds the white flowers it turns those typical aquatic pieces into something cozier. It isn’t so deep as to become gourmand-like. It is just enough different sweetness to resonate with the florals.

If you also are down on aquatics give this a try. I would also urge anyone who is intrigued by the history of the house I described to also put it on your radar. It is one worth spending some time with.