It is fun for me to experience the evolution of independent perfumers. It becomes most interesting when their muse shifts dramatically. It is a way to see if a perfumer is more than their earlier work indicated. Dannielle Sergent is in the midst of having a conversation with a new inspiration. In the beginning of her brand, Cognoscenti, Ms. Sergent created fragrance around the interplay between two keynote ingredients. Then earlier this year she made a dramatic shift. 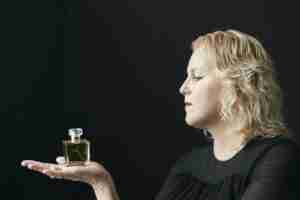 Ms. Sergent decided to start creating a new perfume not from the choice of two ingredients but the interpretation of her own paintings. She called her two inspiration pieces “Dark Lovelies”. Earlier this year Warrior Queen was the first to be released. It was a maximal style of perfume composition as Ms. Sergent layered florals into a satisfying portrait. The companion piece has now arrived; Cognoscenti Wild Child. 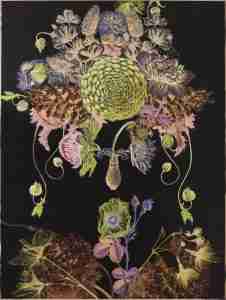 When I looked at the inspiration piece, above, the first thing I noticed was all the black space. It looked to me like there were tendrils of green and florals attempting to pierce that darkness. It is an apt description of Wild Child as Ms. Sergent sets up a dark accord which has a primary green antagonist. Once Wild Child completely comes together it displays the tension of that struggle fully.

The blackness is represented by a fabulous licorice accord. This is not sweet Twizzlers-like licorice this is the herbal original version. It carries a darkness like a black hole with an herbal event horizon. It drew me in with its depth. To make sure I don’t get subsumed completely a lifeline of green strands begins to assemble. Tarragon provides the central filament. It resonates against the herbal quality of the licorice Braided around that tarragon is vetiver, cedar, and moss. As I grab hold a deep rose provides a floral direction for me to climb. Once clear I fall into an earthy dark patchouli my journey complete.

Wild Child is a fitting companion to Warrior Queen although it is more introverted in its construction. Wild Child is given the ability to find the darkness through a green contrast. I am unsure if this is a complete change in direction for Ms. Sergent. I have thoroughly enjoyed both the Dark Lovelies. They show a confident perfumer evolving her aesthetic. I’d like to see more.

Disclosure: This review is based on a sample provided by Cognoscenti.

If I am still writing about perfume ten years from now it will be because the independent perfume community continues to surprise me. This group of passionate artists have always taken the latitude provided by not having a bottom line to aim for the top. They work on their own timetable and let me know when they have something new. Which was how, just after the New Year, Dannielle Sergent contacted me to let me know about her new release Cognoscenti Warrior Queen.

Ms. Sergent has made her mark for her Cognoscenti brand through minimalist compositions that belied the skill inherent in making simplicity sing. When I received her e-mail I was waiting to hear about a new perfume with two titular ingredients. I was instead told she was turning in a different direction. 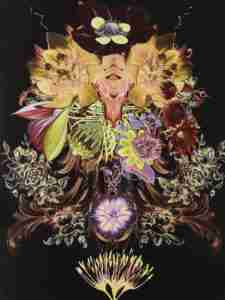 Like many independent perfumers she was interested in fusing the visual with the olfactory. For her new collection, Dark Lovelies, she used botanical oil portraits she painted as the brief for a perfume. The first is Warrior Queen.

When I looked at the picture I immediately perceived layers as the different strata of flora go from light to dark from top to bottom; except for that dark crown on top. There is always a reminder of the darkness of a warrior who becomes a queen. The picture doesn’t exactly portray what I smelled while wearing Warrior Queen. What I did experience was a very different style of layered maximal perfume making from Ms. Sergent.

It opens with an old-fashioned duet of bergamot and lavender. It is easy to feel like we’re on the way to fougere territory. We’re not. Coriander connects to a rich powdery and rooty orris in the heart. Ms. Sergent finds a nice balance between both sides of orris’ scent profile. The powder dusts the lavender while the coriander picks up the carrot-like root aspect. Through this part of the development Warrior Queen feels like a vintage perfume. It changes again as cypriol adds a pungent edge. It is often used as part of an oud accord. Ms. Sergent dials in the smokiness as if it is the remnants of battlefields past. Off in the distance but always part of the warrior. The base returns to a luxurious vintage style as sandalwood, amber, patchouli, and oakmoss provide a chypre accord like they used to be.

Warrior Queen has 16-18 hour longevity and above average sillage.

For those who have tried Ms. Sergent’s previous Cognoscenti releases this is a completely different experience. In her earlier releases she allowed her ingredients to capture space. In Warrior Queen she is adding them in layers into a confined space. Warrior Queen is a heady style of perfume. Based on her earlier work if this was given to me blind, I would never have guessed it was Ms. Sergent. When told I would have nodded to myself because I would have at the least recognized it was made by a very technically proficient perfumer.

Warrior Queen is but the first of the Dark Lovelies as Wild Child should soon be following in the footsteps of the Warrior Queen. I am hoping for more of the maximal layering I found in Warrior Queen.

Disclosure: this review is based on a sample provided by Cognoscenti.