There has been so much that has changed over the last twenty years in perfumery. One of those is the expansion of where it is made. Until recently it was mostly the US and Europe. The rise of independent perfumery as well as the ability to get the word out has allowed the rest of the world to participate. It is particularly interesting when an indigenous independent perfumer embodies the creative energy of their home. When I received my sample set of Curionoir this was very apparent to me. 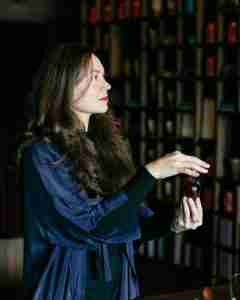 The brand was founded in New Zealand by independent perfumer Tiffany Witehira. I only became aware of it when it showed up here. Over the years she has made ten fragrances. I was able to try all ten though her sample sets. What I found was a collection where I couldn’t tell the early releases from the more recent ones. It indicates to me that Ms. Witehira had put in the work to understand the materials she wanted to work with. I was impressed at the overall quality. As is usual when trying a large collection new to me there was one which I gravitated to, Curionoir Orpheus Incarnate.

What drew me to it was the use of carnation as the keynote. This spicy floral is not featured enough for me. She has made a version of it that is unique. Carnation is so compelling because it has a clove-like core. Think of it as similar to the indoles in white flowers. It isn’t to everyone’s taste. Ms. Witehira takes that character and uses it to combine in beautiful ways with different partners.

In the early moments fig is carnation’s dancing partner. This is that green slightly creamy fig which provides a contrast to the spiciness. Tobacco comes next and this is where the clove comes to life. If you know of the clove cigarettes, Kreteks this is what the middle part of this reminds me of. It then turns herbal as licorice slides into view. The base is the powderiness of orris along with the hay-like tonka bean over musk. This gives the carnation a different profile than what has gone before settling into a place where the floral quality is on top.

Orpheus Incarnate has 12-14 hour longevity and moderate sillage as it is an extrait concentration.

There are a couple others in this collection I want to revisit once the weather becomes cooler. I expect I’ll write about them then. I congratulate Ms. Witehira on proving that New Zealand produces great perfume too.