When it comes to wine I have the same tendencies as I do for perfume, I am not monogamous. I want to find what is newest and what is best. I prefer the smaller off-the-beaten-path producers. I’ve even found myself liking wine far from the traditional wine growing regions. The more I have tried wines from relatively young vinicultural regions the more I am convinced that modern wine making techniques can overcome a lot. The only thing it can’t overcome is the terroir, the place the wine is grown.

You can grow grapes almost anywhere and you can take those grapes and turn them into wine. It will unlikely be very good. In the great regions around the world it is the nature of the totality of the environment which leads to exceptional grapes capable of making great wine. One of those newer regions is in Chile south of Santiago. It is the Colchagua Valley and it, along with the neighboring Maipo Valley, have become one of the best New World vinicultural regions in the world.

In the late 1980’s and early 1990’s a number of French vineyards came over to Chile and figured out that this region was perfect for winemaking. One of the reasons for that is Colchagua sits in the foothills of the Andes Mountains. The snowmelt every year carries down a degree of silt and clay which creates a unique blend of soil to grow grapes in. One of the earliest to commit to this area was Alexandra Marnier Lapostolle and her husband Cyril de Bournet. The middle name of Mme Lapostolle should clue you in to her heritage as part of the family which produces Grand Marnier. In 1994 Mme Lapostolle bought her first vineyards in the region and over the past 21 years has significantly expanded their acreage.

Most of the time New World wine regions start by importing modern rootstocks to start their vineyards. One thing that makes Chile a special wine region is that in the middle of the 1800’s they imported rootstocks from France. In just a few years those French vines would be destroyed by an outbreak of a parasite, phylloxera, which required the destruction of all of the grapes. Chile’s vineyards were spared the plague and the grapes grown today are direct descendants of those original beginnings. 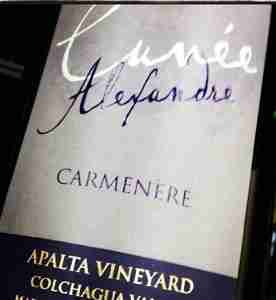 Mme Lapostolle started in the Colchagua Valley with a small winery in the Clos Apalta. The winery was called Casa Lapostolle and that first wine Clos Apalta has become the standard bearer for Chilean wine and how good it can be. It also carries a hefty price tag of around $100. If you love great red wine it is worth it but most people ask me to recommend wines that are less than $20. For that I point them, very often, to Casa Lapostolle and the Cuvee Alexandre labels which are all under $20 a bottle.

Cuvee Alexandre produces eight varietal wines, six reds and two whites. I can wholeheartedly recommend all of them but if you’re only going to try one you should find the 2012 Carmenere. The Carmenere grape is what especially was lost in France when the phylloxera led to the destruction of the vines. It has thrived in the Colchagua and it has been the foundation for something wholly unique to this region. Carmenere falls close to a merlot-like red but has a bit more of a Cabernet Sauvignon spine. It is a perfect mid-weight red. The 2012 Carmenere has a deep spicy nose as you swirl it in the glass. That prepares you for the intense red fruit and chocolate taste as it hits your tongue. As you savor it hints of spices make their presence known. One thing about this wine is it lingers on the palate long after you have swallowed. This is not a wine to be quaffed it is one to savor at an easy pace. It will reward you every time.

The Colchagua is becoming another of those wine regions that I just tell people to go to the wine store and buy because the quality across all of the producers is consistently above average. Casa Lapostolle was one of the first to realize the potential of the region and their wines exemplify the special qualities the best.

Disclosure: this review was based on a bottle of Casa Lapostolle Cuvee Alexandre Carmenere 2012 I purchased.