I am back in South Florida this weekend for an event within my family by choice. Going back to where I spent the first 21 years of my life is always interesting. To see what has changed versus what has amazingly remained the same. To see my friends, and I, change but also remain the same. Then there are those things which remain but evolve. One of those South Florida traditions I have watched from their earliest days to now be the Coconut Grove Art Festival (CGAF).

CGAF had its first edition in 1963. I became aware of it in the way a child discovers many things. I grew up only about a mile from the Coconut Grove section of Miami. This was part of my territory which I covered on my bicycle. One Saturday morning I got up bright and early and headed out determined to go down to Peacock Park in the Grove. Except when I arrived in the area the roads were all blocked off and there were people walking about in the road. Hanging big paintings on racks. I got off my bike and began to walk through the artists setting up their booths. Only in hindsight can I appreciate that this was the beginning of my appreciation of art. As much as I was intrigued by the artwork the artists also drew my attention. I sort of viewed this as a version of the circus coming to town and the artists all seemed like exotic gypsies. This is also one of my earliest memories of an adult speaking to me not as a child. 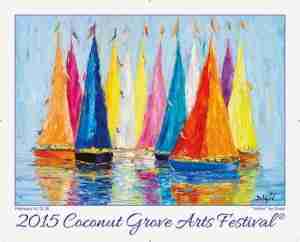 I, in my nascent appreciation of the visual form, was attracted to this oil painting which was an abstract splash of colors. The artist observed that I was clearly drawn into his swirls and points of color on a dark background. He came out and asked me what it was I saw. I replied, “It looks like what outer space might look like.” This was the dreamer speaking not the eventual scientist. I was imagining a place where all of the colors of the rainbow existed somewhere beyond our planet. He broke into a big smile and said with no hint of condescension, “I’ve never seen my work that way. Thank you for letting me see it for the first time, again.” Of course the seven year-old was amazed at the compliment. For me it was the very likely the first time my opinion was asked for in any serious way. It could even be said that it was the first step which lead to the writing I do now.

Back in those days the artists took up a few streets. This weekend they take up the entire Coconut Grove area as the CGAF has become one of the finest outdoor art festivals in the world. I hope to get chance to sneak away for a little bit of time this weekend. To remind myself of the power of art to convert me into a wide-eyed dreamer on the streets of Coconut Grove.