Economy of expression can be a difficult trick for most anyone. When it comes to perfumery the Durante family knows how to consistently make fragrances which sing with three to four notes. Their line of perfume is called Profvmvm and it has produced thirty of these minimal note/maximum enjoyment perfume since their first releases in 1996. The thirty-first release is called Sorriso and continues this style of perfume making.

Sorriso means smile in Italian and it made me smile as one who loves chocolate and orange together. Orange and dark chocolate are my favorite combination as the sweet of the orange contrasts with the bite of the higher concentration cacao chocolate to make for a savory combination. The note list for Sorriso is brief as always; bitter orange, bitter chocolate, exotic woods. When I read that I expected my candy bar to materialize from the atomizer. That isn’t what happened and it made me give up my mental image and really pay attention to what was there. 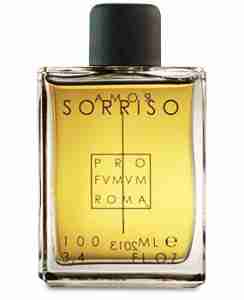 Despite the listing of bitter chocolate it really seems like it is more cocoa powder on display in Sorriso. It is cocoa powder lavishly spread over a tray of orange wedges. Despite the note listing describing both the chocolate and orange as “bitter” I found them to be on their best behavior, more optimistic than jaded. The orange was juicy with a pronounced sweet over the tart. The cocoa powder adds a desiccated quality with a smooth chocolate sweetness with only the slightest hint of an edge. Chocolate in perfume can sometimes be a bit overwhelming and the choice to stay more towards the cocoa powder kind of chocolate makes Sorriso a little more approachable, I think. The woods come into play very late and they sort of sneak up on the orange and chocolate. Both times I wore Sorriso it felt like they just sort of arrived out of nowhere but they keep things soft and tilted towards the sweeter, creamier side of woods.

In a world where communicating in 140 characters is lauded so should Profvmvm and the Durantes be praised for also making a complete olfactory statement in three to four notes. Sometimes that is all you need to make someone smile with delight. Sorriso does just that especially for those who like a little orange with their chocolate.