Of the exclusive lines at the designer brands I have held a minority view. I think the Cartier Les Heures de Parfum is the most artistic collection of them all. In-house perfumer Mathilde Laurent created eleven perfumes representing the hours on her thirteen numbered clockface. It has been six years since there was a release. Which had begun to make me wonder if the absence of five and nine had a grander meaning. I expected Mme Laurent to someday tell us why those two were never interpreted. Looks like my answer is she had been intending to complete her perfume clock after all. Cartier V L’Heure Osee takes care of one of those.

It is a surprising entry because it comes along with two other rose perfumes by Cartier and Mme Laurent. She says in the press release she wanted to explore the more empowering qualities of this ingredient. She calls L’Heure Osee her “punk rose”. I had all of that at the front of my mind when I received my sample. The artistry of the collection with an aggressive mosh pit rose. That is not what I got. I am not sure if calling this a “punk rose” does it any favors. As I became acquainted with it, I came around to my own rationalization of the description. 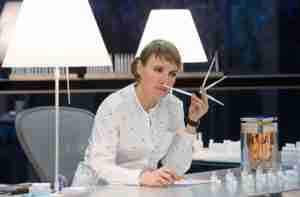 Of the many thigs punk rock stood for one of them was a return to the basics of early rock and roll. Fast songs done with guitars, drums, and maybe a keyboard. By the late 1970’s there were touring rock bands that had orchestras on stage. I hated that. It was not what I believed rock and roll to be. As the bands rose up it was this return to the basic structure of rock and roll which was what made me a punk. What it seems like L’Heure Osee is trying to do is also to return to the simple basics of making a rose perfume without becoming a simpering debutante version.

It is an exceedingly simple version of rose. Mme Laurent seemingly mixes some synthetic and essential oil versions of rose. There is a sturdiness to it which is usually lacking from most spring rose perfumes. There is some of that spicy core from the non-tea rose family. I think there is also a minimal amount of rose oxide which adds a subtle metallic edge. The green of the leaves around the blooms is also present but, in a perfume, labeled as a “punk rose” the thorns are missing.

If my interpretation of “punk” as a return to basics is correct L’Heure Osee delivers on that. If this was meant to be a rose in fishnets and Doc Martens with a sneer; it is way wide of that mark. It is mostly an alternative to the typical blushing spring rose with something a bit more assertive on its mind.

Disclosure: This review is based on a sample supplied by Neiman-Marcus.