Back in the mid 1990’s when every new perfume was trying to be a fresh aquatic, one brand went a different way. In 1994 when Calvin Klein ck One hit the scene it focused on defining a different take on fresh which had nothing to do with an aquatic. It was a brilliant call by the creative team. As much as any of the aquatics it is also a defining perfume of those times. Now while I praise that decision, every year since has seemingly had an aquatic style flanker with summer in its name. Calvin Klein Defy represents the brand’s efforts to create an alternative to the current transparent trend. 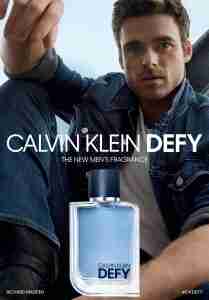 One of the ways they seemingly approached the design it to make a perfume for a man who only has a few, or one, bottles on their dresser. The difficulty comes in being a fragrance that can cross from office to gym to date night. It is one thing that this lighter style plays very well into. Perfumers Loc Dong, Anne Flipo and Pascal Gaurin team up to put it together.

This is as simply constructed a perfume as it gets. A bit of citrus and lavender tangle together at the start. This is that masculine more herbal lavender popular in this sector. The difference is as an older wearer of perfume I like this combination to be more burly. Defy goes in the opposite direction. The citrusy floral is as gentle as a far-off breeze. The transition in the back half comes as vetiver in its greener grassier aspect connects with a synthetic amber in the base which dries things out while keeping it opaque.

I don’t think this is as big a difference as was apparent back in the 90’s. I do believe it is a perfume designed to sell to a casual fragrance wearer. In that regard I think it hits the desired target right in the bull’s eye of today’s trends.

Disclosure: This review was based on a sample supplied by Calvin Klein.