Last month I introduced you to Calone the molecule which launched thousands of marine fragrances. It should come as no surprise that a molecule as important as Calone has attracted much interest for the chemists at the big perfume houses. As I showed in the article on Hedione there is always a better mousetrap to be discovered. In the case of Hedione it was through purifying a mixture down to one specific molecule to find Paradisone. The method used for Calone improvements is more similar to my “day job” in pharmaceutical research.

When I have a new molecule I methodically make changes around the molecule looking for an increase in activity against a particular target. Over time I learn the key pieces of the parent molecule which are necessary for that activity. We call that the pharmacophore. A researcher at Firmenich Jean-Marc Gaudin believes there is an aromachemical equivalent called an olfactophore; that there are essential pieces of a molecule to produce a desired odor profile. He presented this hypothesis in a paper published in January of this year (European Journal of Organic Chemistry, p. 1437-1447, 2015). Following up on a previous 2007 paper ( Helvetica Chimica Acta, vol. 90, p. 1245-1265, 2007) he has used Calone as his basis to explore this. In the figure below I show what was known about Calone.

The Firmenich group had shown in the 2007 paper that increasing the size of the CH3 group made a “better” Calone. By lengthening it by two carbons they could reduce the “low tide” aspect in Aldolone. By branching it they both attenuated the “low tide” smell and enhanced the floral quality in Lilial.

Now it was time to work on the spacing and the double bonded carbon on the other side of the molecule. They quickly discovered if they reduced that oxygen to an alcohol they made it much weaker. The Lilial alcohol shown below is described as “fruity, without character, very weak”

The next idea was to open the ring up allowing for the double-bonded oxygen some flexibility to find the key interaction. The closest they would come is the Aldolone analog shown on the left below which carried a description of “perspiration, aldehydic, slightly aldehyde muguet, vanillic, slightly metallic, nice, too weak”

The final idea was to decrease the size of the ring from seven atoms to five. This would keep the sheer flexibility of the molecule in check a bit. They also wanted to give the double-bonded oxygen a little flexibility by attaching it to the five membered ring instead of making it part of it. Here is where they found some success as the molecule on the right above was described as “watermelon, aldehydic, Aldolone, Cyclosal, green, oyster, ozone, watery” This sounds like a different level Calone as now the watermelon is made more prominent plus the idea of a greener Calone sounds really interesting to me.

This paper makes a small incursion into the hypothesis that an olfactophore exists but it is but one part of the biochemical enigma that our sense of smell presents to scientists.

Header: Picture of the Board Game "Mouse Trap"

When you look back over the history of perfume making there are only a few ingredients which can be said to be that which launched an entire genre. When it comes to the aquatic class of fragrance there is one chemical which is responsible for this, Calone.

Calone has the trivial name of Watermelon Ketone and for once the name is actually chemically correct as Calone (see above) is a cyclic ketone. It was discovered in 1951 by chemists working at Pfizer. It was being designed as a food flavoring agent to “give a watermelon taste and odor to foods.” according to the 1970 US Patent.

Calone by itself does not have any of the pleasant smell you associate with it in fragrance. At full concentration, in its white crystalline form, it has a nose–searing acrid smell. It takes significant dilution before the more palatable aspects become apparent. Because of the kind of molecule Calone is it also has a ferocious tenacity to it. Another reason there was so much interest in using it; especially for the crowd which equates longevity with quality. Mix Calone and one of the synthetic musks and you have a perfume which will literally last for days. 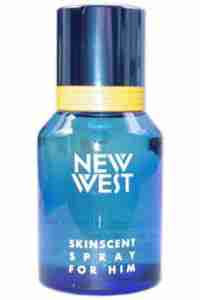 It would make its perfume debut in 1988 when perfumer Yves Tanguy would use it in Aramis New West. In that perfume you got the hint of what it would become known for as it provided this fresh sea-breeze quality. It also adds in the watermelon part too. For all that the Pfizer chemists wanted to use it as a flavor and the trivial name makes it seem like this should be a fruity note; it really isn’t. The watermelon part is not the rich pulp of the fruit but more the watery rind with subtle fruity facets. In New West that watery fruity quality is very much on display especially in the heart when the marine breeze has died down a bit.

It would take two more years before it was the centerpiece of the aquatic perfume which launched a genre, Davidoff Cool Water. Perfumer Pierre Bourdon would take Calone out and let it become the crashing surf as wave after wave of aquatic sea breeze washes over you. In Cool Water the melon quality is really overwhelmed by the marine character.

Calone has become one of the most common ingredients in fragrance. If it says “sea breeze” on it; it is very likely there is Calone in it. That kind of ubiquitous presence has taken Calone from groundbreaking to cliché over the last twenty-five years. The overwhelming tidal wave of aquatics featuring it continues to this day. It has become almost a note which perfumers shy away from because it has become so overused.

Chemists at Firmenich have been working on making a better version of Calone and just at the beginning of this year published a paper on that work. Next month’s Olfactory Chemistry will take you into how changing the structure of Calone leads to some interesting new smells.