Three and a half years ago two of my favorite independent perfumers, Bruno Fazzolari and Antonio Gardoni, collaborated on a wild gourmand perfume called Cadavre Exquis. Through a fascinating creative process these two made a unique take on a gourmand perfume. When I reviewed it back then there was a sense that it was a monster of that style. I dubbed it Franken-gourmand. Mr. Fazzolari has decided to return to that earlier work while providing a new update to it on his own. We now have Bride of Franken-gourmand or as it should be called Bruno Fazzolari Corpse Reviver.

Mr. Fazzolari has some new ideas to go with the previous ones. The one I am happy he retained is the use of camphor as a keynote. It was the brilliant heart of the previous perfume. In Corpse Reviver Mr. Fazzolari keeps the best of what came before while adding one excellent new ingredient; a whisky accord. If you look up the name on the interwebs you will be pointed to a “hair of the dog” hangover cocktail. It was such an anecdotal “cure” that there are multiple variations. To my surprise I could not find a whisky-based one. Which means the perfume becomes the first one of those. By adding in the boozy accord it changes everything while also reminding you of what came before. 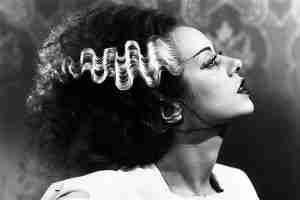 Elsa Lanchester as The Bride of Frankenstein

The camphor is present right away, again. It is such an interesting way to start a perfume. It is contrasted with a similar array of citrus, herbs, and tagetes. At this point it made me feel we were back in the same gourmand laboratory as before. It all changes in the heart. The camphor is not as strong this time around which means the chocolate overwrites it a little more as it oozes into sight. What revives it is that whisky accord. Mr. Fazzolari constructs it from an oakwood absolute. This takes the chocolate in a woody direction. As the two ingredients mingle a slightly burnt caramel emerges where they overlap. As that happens the camphor returns as part of this sticky matrix. This is a dynamic powerful uber-accord. There was a set of dried fruits and civet which gave the sense of decay. That accord has been much more refined here. It is only fitting that you must get closer to The Bride before the sense of rot is noticeable.

Corpse Reviver has 14-16 hour longevity and above average sillage.

I’ve tried both perfumes side-by-side and I prefer Corpse Reviver. There was a fantastic collaborative verve to the previous Franken-gourmand. With a little more experience Doctor Fazzolari has brought a more complete perfume to life.