We have now hit the part of the summer where the garden is near its peak. When a warm breeze blows across our plot of growing things the smell of botanicals is one of my favorite natural smells. That love of herbal extends to my taste in beverages. I regularly add lavender and basil to my lemonade. Gin is my alcohol of choice especially in the heat. I rotate through my favorite gin cocktails with abandon.

Just like the expansion of independent perfumery there is a similar movement happening with distilled spirits. There are now numerous small batch versions of just about any one you can name. Also similarly to the independent perfume movement these small distillers can use materials that large distillers can’t due to cost and sourcing. Which means they are niche liquors.

When it comes to gin the movement is to use more and more botanicals during distillation. This has the effect of adding a lot of complexity to the typical juniper berry coriander axis of most mainstream gins. I have two examples of this kind of gin to tell you about; Green Hat and Monkey 47. 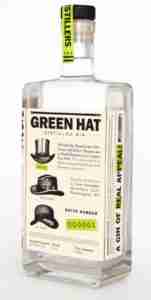 When I moved to the Washington DC metro area I was introduced to Green Hat gin on one of my earliest visits to a craft cocktail bar. I had this amazing martini with this gin which oozed lush green vibes of the summer garden. I found out later Green Hat is from the New Columbia Distillers founded in 2011 right in DC itself. They currently have two seasonal bottlings to go with their regular version.

The name came from the story of George Casaday who was the supplier to Congress during Prohibition. He was known as “The Man in the Green Hat”. Throughout the dry years our lawmakers were able to partake of Mr. Casaday’s wares. Before the mid-term election in 1930 he would be the star source in a series of Washington Post articles exposing the hypocrisy of the Congressmen voting against repeal while drinking his gin.

My favorite cocktail with Green Hat is a Basil Gimlet:

Take five or six basil leaves and half a lime. cut into quarters. Crush them in the bottom of a mixing glass. Add a shot of Green Hat Gin with a fifth of a shot of simple syrup. Add ice and shake well. Strain into a martini glass. Spoon out some of the mashed up basil leaves and float them right in the center. 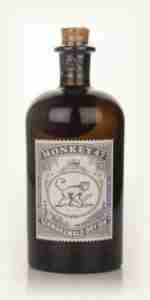 I didn’t think it was possible but I recently discovered an even more botanical gin which also has some perfumed parallels. This new gin is called Monkey 47. The 47 signifies the percentage of alcohol and the number of botanical ingredients added to the distillation. I have been thinking of it as the Le Labo of gin. The absolute fun of this gin is every time I sip some I can discover a new one of the 47. There are a few which stand out more than others and the most unique is the choice of cranberry. You smell it right when you open the bottle and it is a surprisingly charming companion to the more well-known juniper berry.

Monkey 47 also has a colorful origin story. Post World War 2 Royal Air Force Wing Commander Monty Collins was assigned to the Allied half of Berlin. This also contained the badly damaged Berlin Zoo which he made his pet project to restore. During that time, he would sponsor an egret monkey by the name of Max. After he retired from the RAF in 1951 he opened a guesthouse in the Black Forest region of Germany named “The Wild Monkey”. He wanted to serve gin at his establishment but the distillers in that part of Germany mostly made fruit liqueurs. He would ally with one of them to create the trademark gin of his hotel which he called Monkey 47.

Monkey 47 is the first gin I have ever come across I just want to sip slightly chilled with nothing else added. It really is like a perfume for the tongue as there is so much here to experience.

I am planning on using it in a variation on a contemporary gin cocktail called a Blue Bonnet.

Take 10 blueberries and ½ ounce of honey and mash them up in the bottom of a mixing glass. Add one shot of Monkey 47, ¾ ounce of Meyer lemon juice and shake over ice. Strain into a glass containing ice.

The variation is to remove tarragon which is in the original recipe. With the Monkey 47 tarragon probably doesn’t need to be #48.

If you’re looking for a summery twist to your gin recipes try adding either of these excellent botanical gins.

Disclosure: I purchased bottles of both of these gins.