When I go to a website for a new perfume brand sometime I learn the most amazing things. For instance, when I visited the site for Beaufort London I learned the Founder and Creative director is Leo Crabtree. Mr. Crabtree is more familiar to pop culture as the drummer for the rock group The Prodigy. On the website it adds to that biography with the statement, “whose life-long love of fragrance and preoccupation with the darker elements of British history are the collection’s impetus”. His first home was a boat on the River Thames which has tied him tightly to the “the sea, its traditions, superstitions and way of life are ingrained in me.” I think it is an interesting place to begin a career in perfumery.

Mr. Crabtree oversaw the creation of a three perfume debut collection named “Come Hell or High Water”. The perfumers are unnamed but are said to be “the most accomplished perfumers in Great Britain.” The name of the brand comes from the Beaufort scale used to describe the severity of wind on land and sea. On the website each perfume comes with its own “wind chart”. East India has the gentlest of breezes while 1805 has the largest gusts. Coeur de Noir is closer to 1805 than East India. There is a real attempt in 1805 (has been re-named to Tonnerre) to capture the smell of warfare during the Battle of Trafalgar. The problem is it catches all the acrid parts. The harsh smell of a gun powder accord the copper tinted scent of blood plus an almost antiseptic fir balsam. I felt like I was the ensign swabbing the decks post-battle. It is one of the oddest perfumes I have smelled recently but I couldn’t roll with it. Coeur de Noir was slightly different in it attempted to marry the ink of a naval life. Those of the pen in the Captain’s Log with the tattoos of those below decks. The ink accord is done right but the rest of the milieu is buried underneath and never came through for me. The ink accord is worth trying but you have to like it a lot because that is pretty much all there is. 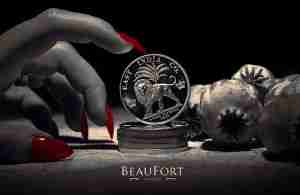 East India (has been re-named to Vi et Armis) was the one I found most appealing. Instead of actual war it was based on the travels of the British East India company and its travels across the known world acquiring goods. What I particularly like about the choices Mr. Crabtree encouraged in his perfumer was the addition of an opium accord to the more expected spice, tea, rum, and tobacco. This is what it must have smelled like to be in a hammock in the hold as your ship headed for home with a full cargo.

East India opens with sticky green cardamom and a smoky Lapsang Souchong-like tea accord. There is a smoky vein that starts with that tea accord that will wind throughout the development. A bit of incense and rum set up the heart of opium. Opium has a sweet narcotic odor that when it goes up in smoke is also present. East India captures that as the incense provides a bit of a contrast to it. This is my favorite part of East India. It heads towards a base where you smell the birch tar on the hull planking next to bags of dried tobacco leaf. The birch tar accord is well-realized and the tobacco provides its own sweet narcotic aspect as contrast.

I applaud Mr. Crabtree for unapologetically going for the naval vibe he was after. I believe he got the perfumers to give him exactly what he was asking for. This is one of the more unique collections you will encounter.

Disclosure: this review was based on samples provided by Twisted Lily.