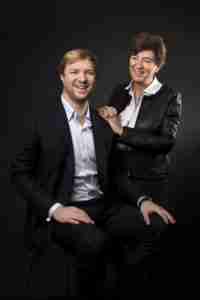 When the wave of mainstream spring rose fragrances begins to overwhelm me there almost always comes an antidote from the niche sector. Just as I think if I sniff another dewy fresh rose I will go mad the independent perfumers ride to my rescue. For 2017 it turns out Patricia de Nicolai saves me with her latest release Nicolai Rose Royale.

Patricia de Nicolai has been collaborating with her son, Axel de Nicolai, over the most recent releases. In the press materials, they describe the brief they used, “A natural and fresh rose with a hint of fruity notes like the rose at the end of the stem.” When I stick my nose in a garden rose on thebush there is a delicate fruitiness underneath the heady aroma. There is also a similar muskiness deep in the heart of a full–bloom rose. The Nicolais capture all of that not so much in a photorealistic way but by using fruity and musky ingredients to recreate that real-life experience.

To do this they take a fabulous Turkish rose as the core of Rose Royale. This is a refreshing choice just because most spring roses go for the more genteel rose de mai or similar. The Turkish rose has much more presence than the Grasse variety. This allows for the Nicolais to take blackcurrant bud and passion fruit to provide the fruity nuance. The blackcurrant buds also provide that sticky green quality as well. All of this is kept subtle allowing the rose to shine brightly throughout. The fruits are displaced by the botanical musk of ambrette seeds and made woody with coriander. At this point the rose is still ascendant. Then in the base a new partner arises to share the spotlight, immortelle. Playing off the delicate botanical musk of the ambrette the maple syrup sweetness of immortelle provides a unique foil to the rose. Once Rose Royale reaches this part was when I felt redeemed from all those debutante roses with one that had something to say.

Rose Royale is much more representative of spring than the alternatives out there. Spring to me is the sight of a rose in full-bloom. Rose Royale is a perfume which captures this.

Disclosure: This review was based on a sample provided by Nicolai.