One of the biggest shifts in music came in 1981 when MTV debuted on cable television. Twenty-four hours a day videos matched to the popular music of the day were shown. Whenever a song of that time period comes on the air, I can’t not see the accompanying visual. This was more succinctly summed up in the comic strip Bloom County by Berkeley Breathed below:

It shows the difficulty of crossing the streams of two art forms. The fragrance industry hasn’t shied away from it even so. One of the more recent attempts is the brand Art Meets Art. They lay out the difficulty right in the name. A little over a year ago they released their first five perfumes. When I received my samples, it wasn’t like they turned into exploding porpoises, but they also missed the energy. Nowhere was it wider of the mark than in the perfume named after the hit by Marvin Gaye; Sexual Healing. The stated goal was to capture the voice of the singer. What was in the bottle was a straightforward tobacco vanilla perfume. Whenever Sexual Healing pops up on my shuffle, I can promise you tobacco and vanilla will not be accompanying it. 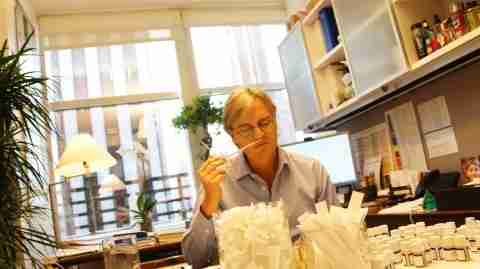 The latest release takes on the classic song by Queen; Bohemian Rhapsody. There is a pop culture moment taking place around Queen and their front man Freddie Mercury. There is a new movie also titled “Bohemian Rhapsody”. That suffered from acting like a rock skipping over the rich pond of the subject. It was something which I felt would have been better as a six-episode series on one of the streaming services. The film lingers on the creative process within the band during a couple of passages. One is Bohemian Rhapsody. It is portrayed as the fever dream of Mr. Mercury that the rest of the band joyfully collaborates on. The perfume, composed by Frank Voelkl, does a better job of also capturing the variable influences within the song.

The top accord captures the lyric of “easy come, easy go, little high, little low”. The high is a sprinkling of metallic aldehydes. The easy come easy go is the cassis. The low is an herbal baie rose. It comes together in an affable come on just before everything turns operatic. M. Voelkl goes for the sopranos of perfumery as he rolls out the white flowers of jasmine and tuberose along with a baroque rose and fleshy ylang-ylang. This is the first time where an accord has felt connected to the musical inspiration in an Art Meets Art release. They make me want to sing “Scaramouche, Scaramouche, will you do the fandango?” What comes next in the song is my favorite part as it shifts gear to full-on rock anthem. The perfume does the same with a lively base accord of patchouli taking the lead with a set of musks and vetiver backing it up. M. Voelkl really lets the patchouli loose; which works.

In this case Art Meets Art found a place where the perfume finally represented an appropriate companion to the music. I don’t think we’ll ever have to worry about perfume killing the radio star, but some nice fragrances can make it more fun. bohemian Rhapsody does this.