When I received my Areej Le Dore sample set of the most recent four releases I knew these were perfumes I was going to have to spend time with to try and write about them. I was introduced to the brand via blogger Kafkaesque which had me ordering a sample set of the new releases as soon as I could. I initially wrote about Flux de Fleur in November 2017. Having read the review from Kafkaesque and having a different experience I chalked it up to being such a dense construction you can get fixated on a different set of ingredients than another experiencing the same perfume.

With the bitter cold temperatures of the end of the year I thought I’d give the one named after winter a try, Inverno Russo. One of the things perfumer Russian Adam does with these perfumes is use the most individual of ingredients. Thanks to Kafkaesque he has shared those ingredients. It is also why these are kind of like vintage wines. Russian Adam may make it again but whether the co-distillates or the oud obtained can be replicated probably makes each unique to its batch. For clarity this review refers to the release in October 2017. 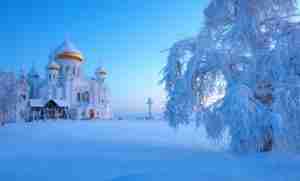 What I notice first upon wearing Inverno Russo is the co-distillate of peach blossom and osmanthus absolute. It forms a pivot point around which rose otto and gardenia form a unique floral accord. There is the fruity nature of the co-distillate followed by the spicy rose and the indolic white flower. Spices come along to give the rose a bit more prominence. Then the musk arrives. This is real musk, legally obtained by Russian Adam. It is probably the first time many who try this will encounter the real thing. I have always noticed a kind of fattiness to the real musk grains I have. Russian Adam takes that and uses synthetic civet, tonka, along with a mixture of ouds to provide an animalic chocolate accord. It is musky, but it is also bizarrely gourmand simultaneously. The chocolate begins to fade with the woods and the musk remaining throughout the last hours.

As I read through the other reviews of Inverno Russo it again seems like we are all wearing a different perfume. I link to Kafkaesque’s as an example. Then I think I’ve finally hit on why that is so. One of my favorite games to play on my tablet is what is called “hidden object”. You are given a scene and asked to find a list of things within it. Based on where your focus is that is the order you fill out your list. Inverno Russo was kind of a perfume version of that where I “found” the peach blossom and osmanthus co-distillate first before finding the rest. I am guessing others found other things first. These are fabulously dense architectures within which you can get lost; just leave a thread of hidden objects behind you so you can return to where you started.